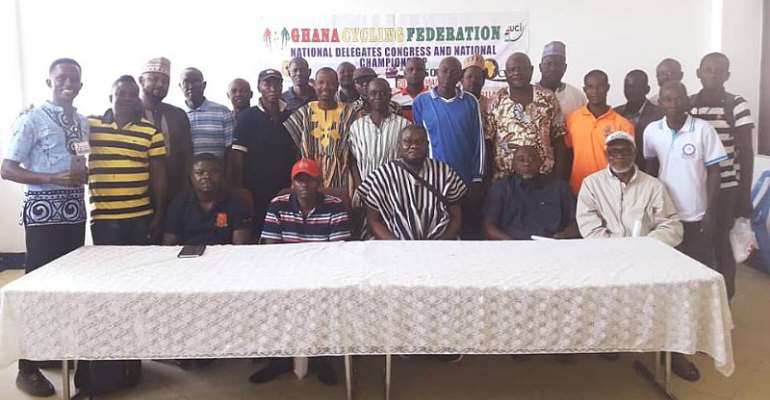 This year’s electoral Congress by the Ghana cycling federation ended on a colourful note at the conference hall at the Tamale sports stadium on Saturday,15th, December 2018.

Legal luminary and a member of the UCI legal team, Mohammed Sahnoon of River Park Accra maintained his position as the federation's President for the next four years.

Ever humorous, affable and media consultant, Dennis Kweku Moore of Vital Cycling club in Kumasi retained his position as the Secretary General of the federation as well.

According to Kweku Moore, twelve clubs in general represented at this years congress, as Mr Ali Umar of Pacesetters Cycling club also stayed put as the federation's treasurer.

The slot of Vice President and one other member was vacant. Congress resolved to open nominations for the two positions and interested members were directed to pick their nomination forms and submit to the federation for election on the 29/12/18.

There was proposal for consideration of members and amendment of the constitution shich waz circulated for dizcuzzion at Congress.

However, members resolved to further study and make their comments known before the 29/12/18 for adoption and forwarding to UCI/CAC for approval.

Same would be forwarded to the UCI for approval when resolved at the next meeting.

It would be recalled the Cycling fraternity encountered some legal turbulence with regards to its internal structuring but sliced through the difficulties by smoking the peace pipe through the intervention of the Vice President of the Union Cycling International - UCI and President of the Confederation of the African cycling, Dr.Waggih Azzam.

The Cycling Federation is one of the most notable sports under the Sports Authority and aims at building an enabling Wheeling environment for lovers of the sport.

The federation is seeking to advance on a rapid course into securing a positive plan for its only athlete Frederick Assor who has qualified for Tokyo 2020 in Tandem Cycling on records as at December 7th 2018.