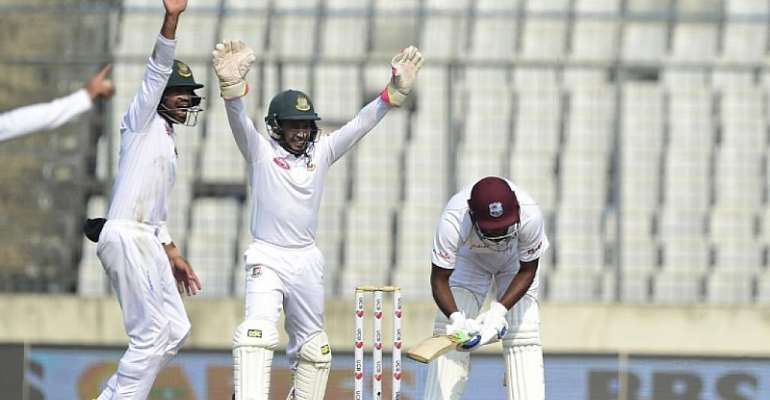 Bangladesh have claimed their first Test series win in four years after thrashing West Indies by an innings and 184 runs in the second Test in Dhaka on Sunday. Off-spinner Mehidy Hasan claimed his second five-wicket hall in the match to help his team sweep the two-match series.

Resuming their innings on 75 for five , the remaining West Indies batsmen did not offer much resistance as they were dismissed for 111. Hasan led Bangladesh's bowling attack claiming seven wickets in the innings.

Trailing by 407 runs, West Indies were forced to follow on. The visitors fared only slightly better in the second innings, scoring 213 runs. Hasan starred again, claiming five wickets to return with his best ever bowling performance.

Shimron Hetmyer was the only silver lining in an otherwise disappointing Windies performance as he scored an attacking 93 off 92 balls with nine sixes and a four.

Hetmyer fell short of registering his maiden Test century when the batsman went for a 10th sixth, but ended up giving a catch to Mohammad Mithun at long-on.

“We did the process right and we did well in every department. Overall a very good team effort,” said Shakib, who claimed three wickets.

Bangladesh won the opening Test match in Chittagong by 64 runs.