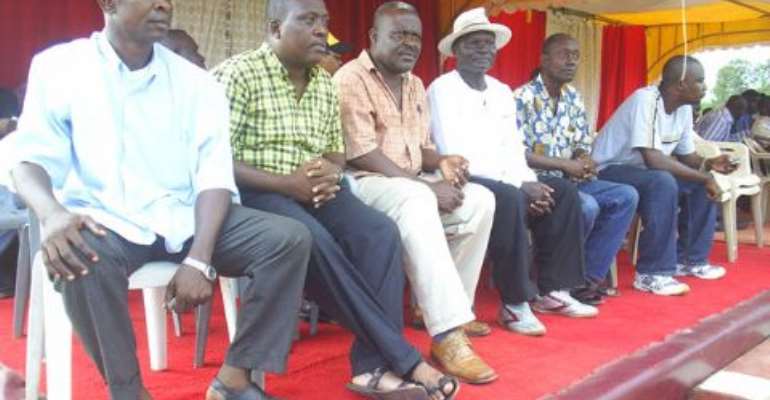 An interesting match was witnessed at the Dansoman Park yesterday between the two truly professional clubs in the country Liberty Professionals and the soccer miners, AshantiGold Sporting Club that ended in a goalless drawn game.

The match was characterized by beautiful ball control, excellent inter-positional passes and agility displayed on the part of the two goalies. Soccer was a delight to watch when AshGold paraded the likes of Valentine Atem, veteran “General” Emmanuel Osei Kuffour and Richard Awuah who were leading the attack for the “Aboakese” side and supported by Mohammed Polo, enterprising Kwaku Sarpong, Daniel Asamoah and Alfred Arthur, whilst Skipper Kofi Amoako, Joe Hendricks and Issiahaku Zakari were manning the defence. That was a typical 3-5-2 formation cleverly adopted by coach Evans Augustine Adotey to contain the might of Sir Jones Attoquayefio's well-rehearsed tactics.

Liberty had already beaten all the two Ashanti Region clubs by higher goal margins at the Dansoman Park and it was the turn of AshGold to follow suit but kudos to coach Adotey who proved beyond doubts and managed for an important drawn game.

Though the match was fairly a balanced one with AshGold slightly on top in the first half by making several attempts to open the score line but luck eluded the miners. Valentine Atem who has successfully undergone his medical treatment announced his comeback with accurate passes and powerful bullets that attracted applause from Liberty fans.

Osei Kuffour in the 23rd minute beat his marker in the 18yard box and fired a shot but missed the post by inches. Osei Kuffour and Joe Hendricks respectively attracted yellow cards for foul plays whilst David Addo was the next to smell the referee's wrath when he was also yellow carded for a similar offence in the 37th minute. Richard Awuah's headwork missed the post narrowly in the 43rd minute after Atem had cleverly laid a deep in-swinger.

The second half of the game went in favour of the homesters after Sir Jones Attoquayefio had issued instructions to his boys but the impregnable defence of AshGold stood tall to most of the dangerous attacks by Kwame Obeng Darko, Kofi Nti Boakye and Eric Boakye operating from the right flank.

Ricky Essuman and Solomon Opoku replaced Kofi Amoako and Mohammed Polo respectively in the early part of the second half. Ricky Essuman was booked in the 63rd minute for pushing Kwame Obeng Darko who found the defence of AshGold too tough to penetrate.

Kwame Obeng Darko was however substituted in the 75th minute by Kwaku Duah but the change could not yield any results. Fatau Dauda who was adjudged the best player of the match made a crucial save in the 76th minute when Kofi Nti Boakye broke lose in AshGold 18yard box and blasted a grounder.

In the 85th minute Valentine Atem's move with Kuffour saw Atem delivering a powerful bullet that was parried away by Kottey Blankson but the resultant corner kick was however wasted until the referee brought proceedings to an end.