Songne Yacouba Begins Gym Works As He Steps Up Recovery 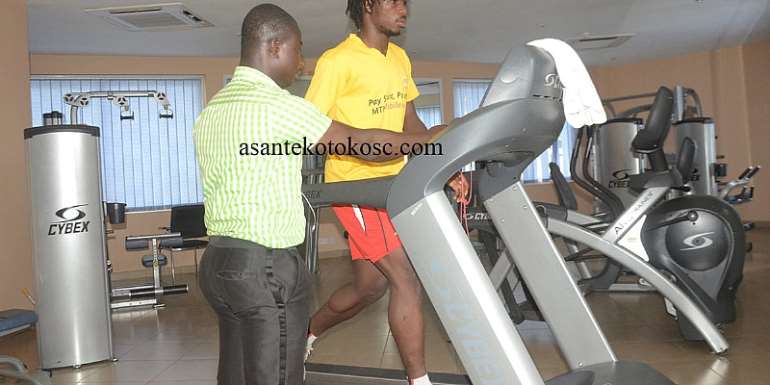 Burkinabe striker, Songne Yacouba, has returned to work in the gym as he steps up his recovery from illness.

The goal poacher has been on the sidelines for some weeks now as he took ill while on holidays in Burkina Faso.

Yacouba returned to Kumasi last week and has been receiving treatment from doctors, who have given him the green light to start fitness regimes in his race to catching up with his colleagues.

Yacouba was at the gym on Tuesday, under the care of medical team member, Alex Gyinaye, where he went through a series of fitness activities successfully.

The striker showed more than enough to prove he is ready to peddle his way back to full fitness, the Asante Kotoko first team, and his old predatory form.

“I feel ok,” Yacouba told asantekotokosc.com. “I don’t feel pain in any part of my body. I feel very strong and my endurance is also very encouraging. I am physically ready to catch up from where I left off.”

Alex Gyinaye was also satisfied with the player’s output when he spoke to asantekotokosc.com after the session.

“His body weight is very normal. He doesn’t look like someone who has been inactive for such a time. His endurance level is also very good. We expect him to be back to his old form in no time.”

Yacouba was previously scheduled to commence his fitness and endurance training at the Adako Jachie training grounds on Tuesday, but plans changed and the player would instead be working out in the gym until, at least, Thursday.