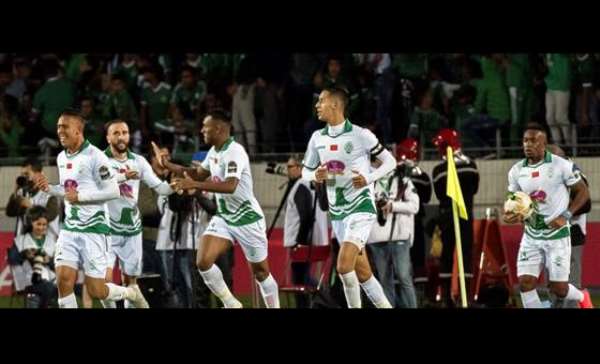 Raja Casablanca of Morocco scored three goals in 19 minutes to take a 3-0 lead over V Club of the Democratic Republic of Congo Sunday after the CAF Confederation Cup final first leg.

Soufiane Rahimi broke the deadlock on 47 minutes at a packed 65,000-capacity Stade Mohammed V in the Moroccan commercial capital and netted again just past the hour mark.

Raja have won the Champions League three times and the Super Cup and now defunct CAF Cup once each, but their last African success was 15 years ago.

Benhalib scored after Yannick Bangala was sent off for his second yellow card offence following the foul that led to the spot-kick.

Raja were back to their predatory best after failing to score more than twice in the two-leg quarter-finals or semi-finals.

V Club had not conceded more than two goals in 12 previous matches in the competition this year as they sought to keep the trophy in DR Congo after TP Mazembe won the last two finals.

Spain-born Raja handler Juan Carlos Garrido is hoping to become the first coach to win the Confederation Cup with two clubs having guiding Al Ahly of Egypt to the 2014 title.

After forcing a 0-0 draw away to Raja last May in the group stage, V Club travelled to Morocco hopeful of achieving another good result ahead of the second leg next Sunday.

But an early injury to star striker Jean-Marc Makusu Mundele was a major blow to the Kinshasa outfit and it was a surprise that they kept Raja goalless for 47 minutes.

They must now succeed where the six other CAF opponents of Raja this year failed and put three goals past Anas Zniti to have any hope of overtaking the deficit.