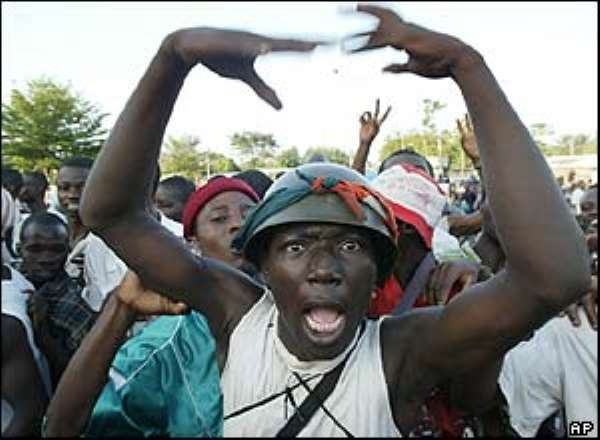 . . . Hamza saves referee's life Tamale, Nov. 7, GNA - Captain Hamza Mohammed of Real Tamale United (RTU) on Sunday did a yeoman's job to save the life of referee Jeffrey Amamoo from Cape Coast who handled the penultimate GT Premier League match between RTU and Kumasi Asante Kotoko at the Kaladan Park. Hamza, who was closer to the referee when irate RTU fans charged unto the field to vent their spleen on him (referee) for showing Gafaru Abdulai the yellow card, pitched his hands on the chest of Amamoo, using the last ounce of energy in him to push him to run backwards from the Kotoko's goal area to the other end of the field for Police protection. It all started in the 75th minute when the incensed fans, invaded the pitch in an apparent reaction to the referee's decision to show a yellow card to Gafaru for using his hand to collect the ball over the head of a Kotoko's defender in the penalty box. The Referee then tried to remove his handbook from his back pocket to record the offence but unfortunately, the RTU fans thought he was about to issue a red to the player and therefore, had to invade the pitch to stop him. Hell then broke loose, as the angry fans attacked anybody they came into contact with including the security personnel using all kinds of weapons. Both players and officials of Kotoko had no option than to use the few plastic chairs available to protect their heads from the stone-throwing fans. Kotoko's central defender Issah Ahmed had his vision blurred as he was blinded with sand. The police reaction was swift; several canisters of tear gas were fired into the crowd plus a few warning shots just to scare off the troublemakers. Ironically, the police reaction rather infuriated the hooligans as they intensified hurling stones at their visitors and the security, fracturing the leg of a police officer. While the action was ongoing at the stadium, a separate group in solidarity with their other troublemakers, assembled outside the arena to mount barricades on the main Tamale-Kumasi road. Slabs and lorry tyres were set ablaze on the main road trapping the Kotoko's contingent.

The policemen had to seek assistance from the military before they were able to escort the Kotoko contingent to the Tamale Police Station for safety.

In the match itself, both teams started cautiously but as game progressed, RTU had better of the exchanges as they created several goal scoring chances but failed to utilize them. 07 Nov. 05