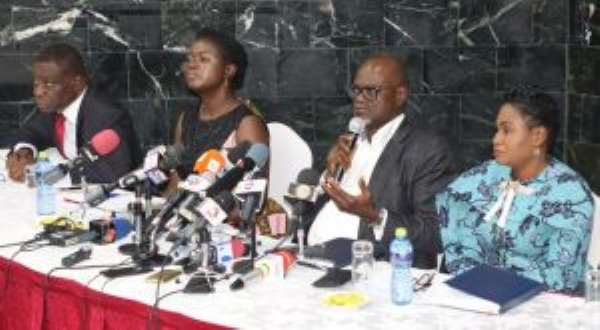 The FIFA Normalization Committee has told Parliament's Youth and Sports Committee that it would require an amount of 7.2 million Ghana cedis to run its programmes.

The Chairman of the Youth and Sports Committee of the House, Alex Kofi Agyekum, who made this known in a Citi News interview, said the Committee seeks to use the money being requested to organize a football competition among other things, to revive football in the country.

“They have some kind of programmes they are going to roll out and they told us they needed 7.2 million Ghana cedis to organize some competition as a way of reviving the local clubs. We have asked them to present the details to us,” Mr Agyekum said.

The Committee met with the Normalization body to find out about the work done so far in the exercise of their mandate.

Speaking to Citi News, the Mpohor MP said the Sports Committee will keenly monitor the work of the Normalization Committee.

He further indicated that the committee will not be pressurized to come out with recommendations that will not stand the test of time.

“At the same time too, we are not expecting them to proceed like a tortoise in discharging their duties,” he added.

Meanwhile, Chairman of the Normalization Committee, Dr. Kofi Amoah, has said the body will work hard to revive football economy of the country.

Normalization Committee named
FIFA named the members of the Normalization Committee in September, following a halt in football activities, after an investigative piece on football corruption by investigative journalist Anas Aremeyaw Anas, shook the foundations of the game in the country, leading to the exit of former FA Boss, Kwesi Nyantakyi, who was subsequently banned for life by Fifa.

The Committee is chaired by Dr. Kofi Amoah, with Kofi Duah Adonteng Former Airtel CEO Lucy Quist, and Naa Odofoley Nortey, a board member of the Attorney General department completing the list of members.

The Committee replaced the Ghana Football Association's Executive Committee and is responsible for the day-to-day running of the football in Ghana for six months, till an election is held for a new set of leaders.

The Normalization Committee, according to FIFA should, not exceed the end of March 2019.