Hearts Shares Spoils With Dreams In Friendly At Dawu 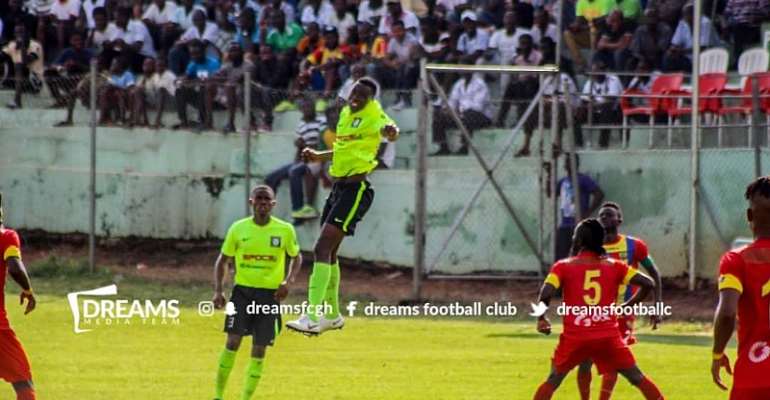 Ghana Premier League sides Hearts of Oak and Dreams FC played out an entertaining 1-1 draw at the Theatre of Dream in Dawu on Sunday in a friendly encounter.

Themed 'Repeat on the mountain', the contest attracted a respectable crowd for the first time since the Zylophone Cash Premier League was suspended and it was the Phobians who got off to a perfect start.

Joseph Esso shot the Phobians into the lead in the 13th minute, courtesy a deflected feeble attempt from Fatawu.

With 8 debutants mostly teenagers in his starting line up, Manager Pasoja's squad took a little while before settling into the game as the Phobians nearly doubled the lead in the 23rd when Akowuah's free kick missed the post by inches.

The Still Believe lads reformed and showed up more after the 30th-minute mark. Despite the dominance in possession, the team looked shy of confidence upfront until Muntari's moment of individual brilliance.

The talented left-back stole the show when he dribbled into a feeble Hearts defence before releasing a rocket into the top right corner of the post, leaving goalkeeper Ernest Sowah completely helpless on his lines.

Much more damage could have been done by the newly assembled squad when a telepathic play between Cletus, Armah and Amoh created an opening for Clifford but the young attacker could barely manage a shot on target, summing up a breathtaking first half.

Both teams returned from the locker room refreshed after the first half of the game poised for victory with bragging rights up for grabs.

Abdallah received the marching orders after a second bookable offence in the 70th minute, forcing quick technical changes in Manager Pasoja set up as Hearts momentarily enjoyed the advantage.

Selasie Bakai almost stunned the home team in the 75th minute after lashing unto Yakubu's defensive blunder but Dreams FC goalie Issac Amoako scored full marks as he tipped off a goal-bound overhead chip in a 1v1 situation.

With ten minutes remaining, Hearts of Oak survived series of nervy moments as the home side pushed for the win as substitute Richard Addae maintained a force upfront regardless of the number deficit.

After 3 minutes of added on time, scores remain the same as the two sides settled for a draw in the hyped encounter which lived up to the billing.