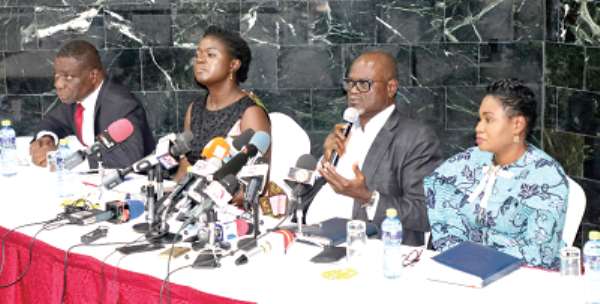 The President of the Normalisation Committee (NC) of the Ghana Football Association (GFA), Dr Kofi Amoah, says one of his outfit's commitments is to ensure that they put in place structures to financially strengthen clubs in order to maintain their best players in the local league.

Dr Amoah, who led his four-member team yesterday to address the media about their output since taking office last month, bemoaned how quality local-based players exited the league after excelling for a season and stressed the need to institute measures to curb it.

He explained that the club licensing regulations must be enforced in order to adequately equip them.

"With the kind of players transferred abroad on a yearly basis, it is affecting the quality of the league and it is one of our core mandates to ensure we put in structures to financially strengthen clubs in order to enable them to hold on to their best players.

"It is becoming a norm that players, after excelling in a single season for their respective clubs, depart in search of greener pastures because their teams are not able to cater for their needs," Dr Amoah noted.

He, however, revealed that his outfit, together with the Ghana League Clubs Association (GHALCA), would organise a novelty competition in place of the league in the meantime and called for sponsorship to ensure its success.

Talking about the recent Ghana-Sierra Leone Africa Cup of Nations (AFCON) qualifiers which were cancelled due to the Sierra Leone FA ban by FIFA, the vice president of the committee, Mrs Lucy Quist, said they were yet to get a response from the Confederation of Africa Football (CAF), after writing to the continental body on the matter.

Mrs Quist assured members of staff of the GFA that they were committed to paying their three months salary arrears as soon as they got access to the association's bank accounts.

"We are waiting to hear from CAF on the Ghana-Sierra Leone game following a letter we sent to them after the match was cancelled.

“On the GFA staff’s salary arrears, the accounts of the association were just unfrozen and we are yet to have access to it, but as soon as we are allowed by the bank we will pay them," she assured.

Naa Odofoley Nortey, a member of the committee, asked for more stakeholder inclusion in the discharge of their duty when she explained that the job was a very hectic one which required more than four people to accomplish.