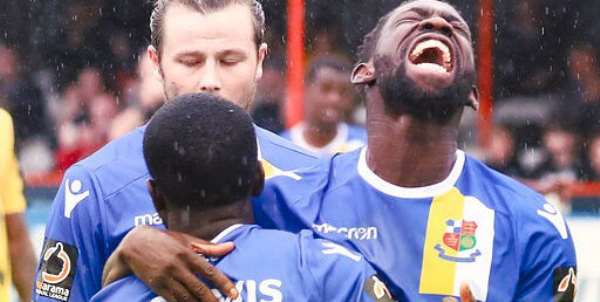 Godfrey Poku came within touching distance of the FA Cup third round last season - but he reckons Wealdstone have the potential to go even further.

The Stones midfielder featured for Oxford City a year ago when they knocked League Two side Colchester out of the competition before an agonising 3-2 injury-time defeat to Notts County in the second round.

Now Poku is aiming to better that performance with Wealdstone, who have run into form as they approach Saturday's fourth qualifying round tie at home to Sutton United - beaten by Arsenal in the last 16 two years ago.

Bobby Wilkinson's revamped side have won their last four games in all competitions, including a 2-1 victory over Hampton & Richmond Borough that lifted them to fourth place in the National League South table.

A crowd of almost 1,200 witnessed Wealdstone's triumph at Grosvenor Vale and Poku told West London Sport: 'I've no doubts that if we start like we did in that game, we've got a chance [against Sutton].

'We've got a hard task - Sutton are doing well in the National League, so we will have to up our game. But there's nothing we should be scared of, nothing at all, and we can be a match for them.

'We've got a good mentality here, we know what we need to do. We're just asking everyone to come down and get behind us on Saturday and hopefully, we can get that win to take us into the first round.

'I was absolutely gutted to lose in injury time last year, so I hope we can get further with this team. With no disrespect to Oxford, there are better quality players here.

'Everyone loves the FA Cup because there's always the opportunity to play against a higher team. I've got a few mates at Sutton and I was at that game when they played Arsenal - it was great.'