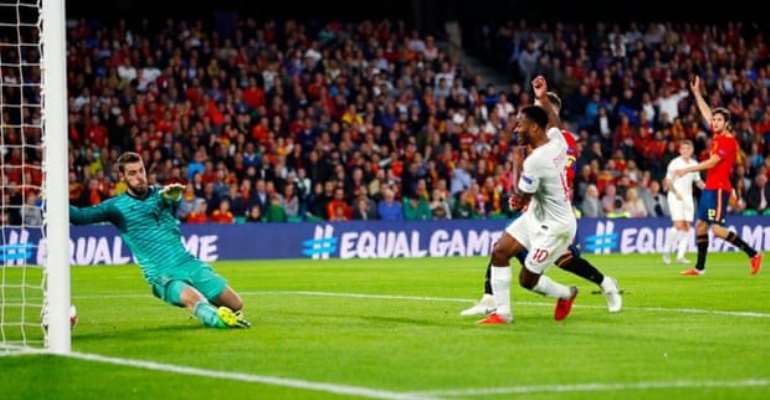 Raheem Sterling scores his second, and England's third, goal in front of a disbelieving crowd in Seville. Photograph: Eddie Keogh for The FA/Rex/Shutterstock

England won in Spain for the first time in 31 years as they recorded a memorable Uefa Nations League win over Spain in Seville.

Gareth Southgate's side were 3-0 up after a sensational first half, Raheem Sterling ending a three-year and 27-game barren sequence with a thunderous early opener and he was on the mark from close range for the third before the interval, with a composed strike from Marcus Rashford sandwiched in between.

Spain, torn apart by England's pace in those opening 45 minutes, responded in predictable fashion in a chaotic second period as Paco Alcacer pulled a goal back just before the hour with a near-post header.

England lived on their nerves, particularly goalkeeper Jordan Pickford, whose exceptional ability with the ball at his feet helped create their first two goals but was also lucky to survive a penalty appeal when he seemed to bring down Rodrigo after attempting to be too clever in his own area.

Spain hit the woodwork and Sergio Ramos scored with the final act of the game in the 97th minute - but England survived to secure a famous and deserved victory, their first here since a 4-2 win in 1987 and in a country that has rarely tasted defeat on its own turf.

This was their first loss at home in a competitive fixture since 2003.