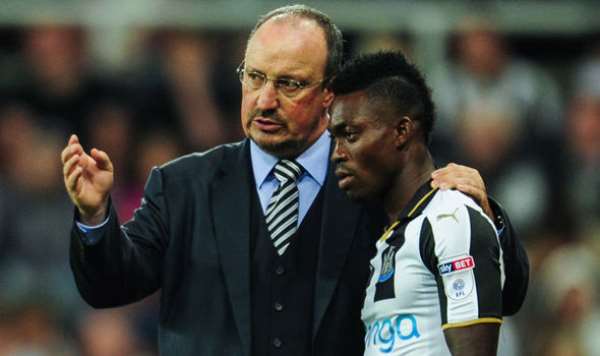 Ghana winger Christian Atsu has described Newcastle United manager Rafa Benitez as a 'father' figure despite his lack of game time at the club.

The 26-year-old initially signed for Newcastle on a season-long loan from Chelsea during Benitez's first full campaign in charge, and helped guide the side back to the Premier League at the first attempt.

But he has endured a difficult start to the ongoing English Premier League after making five appearances, mostly as a substitute.

However, the former Chelsea wideman has insisted that everything is well between himself and Benitez and claimed that the Spaniard has been good to him ever since he joined the Tyncastle side, labelling him as a father-figure.

'The surgery I had has affected me in several ways,' Atsu told Hello FM.

'This is my third season with Newcastle United. My first season was when I joined them on loan from Chelsea in the Championship and had enough playing time. Eventually, we qualified back to the Premier League.'

'In the second season, I played a lot of games but things have changed this time around because of the surgery I underwent before the World Cup. It has really affected my play because I've been a little slow but I'm working hard to hit top form soon,' he said.

'Rafael Benitez understands my situation and he is trying his best for me. In fact, he has in a way adopted me as his son and I regard him as my father too,' he added.

Atsu has made 65 appearances during his time on Tyneside, scoring seven times.