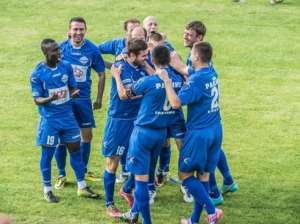 Ghanaian midfielder Samuel Owusu was at his usual best for Cukaricki FK as they battered Dinamo Vranje 6-1 in the Serbian Supaliga on Saturday.

Following a cagey opening 35 minutes, Cukaricki broke the deadlock after Luka Stojanovic connected to Samuel Owusu's through pass on the 34th minute of the game.

Slobodan Tedic fetched the second goal for the hosts on the 50th-minute mark before Darko Puskric extended their advantage three minutes later.

Stojanovic got his second of the afternoon in the 55th minute courtesy another Owusu's pass.

Malden Stevanovic put the game the reach of the visitors in the 58th minute before Zeljko Dimitrov pulled a goal back for Vranje.

Darko Zoric sealed the win for Cukaricki in the 63rd minute.

Owusu lasted 64 minutes against his former side while compatriot Zakaria Suraka played full throttle for them.