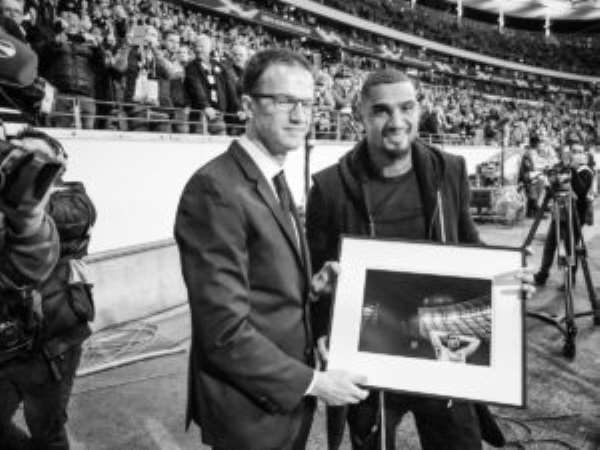 Ghanaian forward Kevin Prince Boateng was honoured by his former club Eintracht Frankfurt for his service at the club last season.

The 31-year-old, who joined Sassuolo in the summer played a significant role at Frankfurt last season helping the club win the DFB Pokal for the first time in 32 years.

The German club showed appreciation to the Ghana international, who was rewarded by his former club after addressing fans at the Commerzbank-Arena before their Europa cup clash against Lazio.

Eintracht Frankfurt made sure they put some smiles on the face of the Ghanaian with an emphatic 4-1 win over Lazio.

On Thursday, the 31-year-old who joined Sassuolo in July was given a rare opportunity to address fans and also bid the club farewell at the Commerzbank-Arena before kick-off.

After, he has presented a memorabilia of his time at the club.

A brace from Danny da Costa and goals from Filip Kostic and Luka Jovic. capped the midfielder's trip to Germany which he described as 'a special night'.

Meanwhile, the former AC Milan forward took to Social media to express joy to the club, which has played a huge role in his career describing the night as a special one.