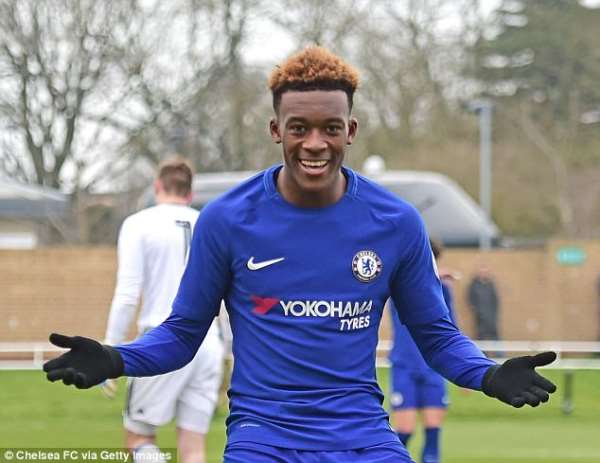 Chelsea manager Maurizio Sarri is not sure if Ghanaian youngster Callum Hudson-Odoi will feature in their Europa League clash against Videoton on Thursday.

Hudson-Odoi, 17, started Chelsea's Community Shield defeat against Manchester City at the start of the season but has not made any minutes since.

A number of Chelsea fans were hoping to see him in action in the opening Europa League game last month but Sarri did not select him in the squad.

However, the Blues boss was unable to confirm whether teenage sensation Callum Hudson-Odoi would feature for the Premier League club, with Eden Hazard is contention to start.

"I said a couple of weeks ago the period from the first international break to the second is my pre-season so I'd like to see every player in this period," Sarri told the press.

"Maybe tomorrow it's time to see Loftus I think. I don't know for Odoi at the moment.' Loftus-Cheek enjoyed a productive loan spell at Crystal Palace last season and his performances earned him a place in England's World Cup squad.

But it has been another frustrating spell for the midfielder at Stamford Bridge and he has only featured in three games so far this season.

'He was unlucky in the last three weeks after the international break. He had the injury,' Sarri said of Loftus-Cheek.

'In the last five or six days he has been better so I think he's able to play tomorrow.

"He is under a lot of pressure but he must get used to it. It's normal for a player of his level to have pressure from the club, the manager, the fans.' Sarri also admitted it would be 'difficult' for Chelsea to win the Europa League this season.

He added: "We want to arrive until the end. The Europa League is a very unusual competition. 'At the moment we don't know the names of all the opponents in the next round, when teams from the Champions League arrive. 'It's very difficult. But we want to be there until the end."