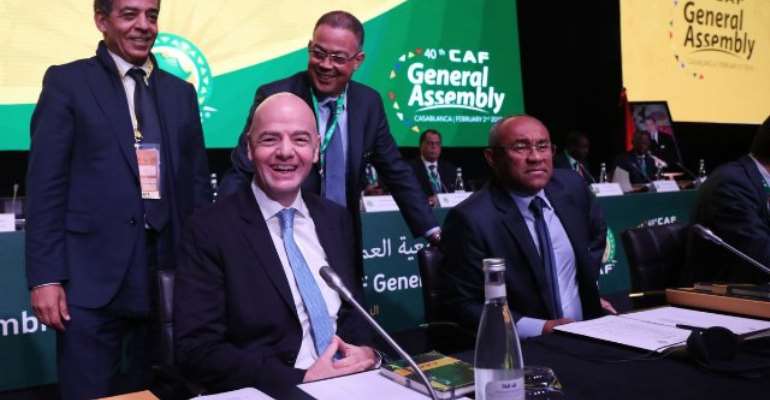 CAF President Ahmad Ahmad has explained why Africa is backing current Gianni Infantino in the FIFA President's bid to stand for a second term.

During this weekend's CAF Extraordinary Assembly in Sharm El Shiekh, Ahmad revealed that the Swiss football administrator had the backing of Africain his pursuit of an extended tenure as FIFA chief.

"It is not CAF that decided that Africa supports Infantino for another term," Ahmad told journalists at a press conference, "but associations expressed their willingness to support him because of the reforms and positive changes he has brought about in football.

"Every association in Africa was present in this meeting," he added. "It is the majority of Africa which has decided, and we as the CAF leadership cannot say no.

"Each of the associations showed that they want to support Infantino independently and actually sent letters to CAF expressing their support," continued Ahmad.

"Infantino continues to make football better as a leader and supports a lot of our development projects in Africa."

Infantino, who was elected in February 2016, revealed that we would run for re-election ahead of the World Cup in Russia. The elections will take place during the FIFA Congress in Paris in June 2019.

"I want another term because I have embarked on several reforms," Infantino said during the CAF Extraordinary Assembly on Sunday. "I believe in what I do for football and will continue to do it with my best effort."

An official endorsement from CAF has previously proven no guarantee of votes for presidential candidates, with many African associations breaking ranks in past elections.

No other candidate has yet declared an interest in standing against Infantino.