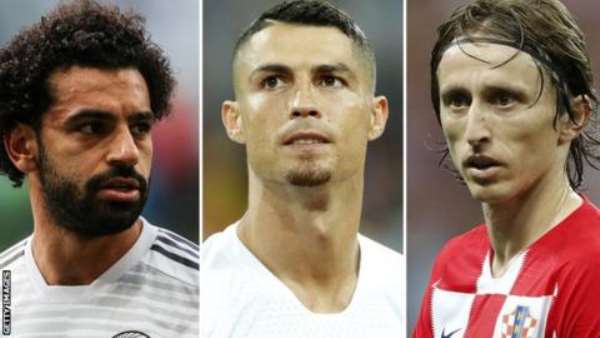 The world's best male and female footballers will be named at the Best Fifa Football Awards in London on Monday.

Cristiano Ronaldo, Luka Modric and Mohamed Salah are the finalists for the men's player award for 2018 - with no place for Lionel Messi.

Ada Hegerberg, Dzsenifer Marozsan and Marta are the nominees for the women's player award.

Gareth Bale is one of 10 candidates for the Fifa Puskas goal of the year.

This is the third year of the Best Fifa awards after the world governing body's six-year association with the Ballon d'Or came to an end.

Men's player
This is the first year since 2006 that Lionel Messi has not been in the final three of Fifa's top award - then called the Fifa World Player of the Year. It will also be the first time since 2010 that Ronaldo and Messi have not been the top two in either order.

The 33-year-old - who has won both Best Fifa awards so far - is nominated after a season in which he won his fifth Champions League title. He scored 15 goals to ensure he would be top scorer in the competition for a sixth consecutive season - including a shared one in 2014-15.

He scored 44 goals in as many games in all competitions for Real Madrid - including 18 in his final 10 La Liga games. Ronaldo then scored four times at the World Cup for Portugal to make him the second top scorer in international football history.

A £99.2m move to Juventus followed this summer, where he will bid to win the Champions League with a third different side.

Luka Modric (Real Madrid and Croatia)
Modric, who is 33 like his former team-mate, enjoyed arguably the best year of his career as he too won a third consecutive Champions League trophy - before reaching the World Cup final with Croatia.

In the summer his international team-mate Dejan Lovren said: "Modric would probably be getting more attention if he was German or Spanish. He would maybe even be a Ballon d'Or winner."

The former Tottenham midfielder won the Golden Ball award for the best player in the World Cup after their final defeat by France. He scored in their opening two matches and also set up one goal.

Mohamed Salah (Liverpool and Egypt)
The 26-year-old had the season of his career to take Liverpool to the Champions League final and Egypt to the World Cup - although he ended up without a trophy.

Following a £34m move from Roma in June 2017, he scored 44 goals in 52 games for Liverpool, winning the Premier League Golden Boot on his return to English football after a disappointing spell at Chelsea earlier in his career.

A shoulder injury suffered in the Champions League final meant he was not fully fit in Egypt's first World Cup since 1990 - but he did still manage two goals in as many games.

Women's player
Last year's winner, Lieke Martens of Barcelona and the Netherlands, did not make the final 10 this time. England's Lucy Bronze made that list but was cut from the final three.

Ada Hegerberg (Lyon)
The 23-year-old, who is currently on an international break from Norway, scored 53 goals in 32 games last season as Lyon won the Ligue 1 and Champions League double for a third consecutive season.

She scored 15 goals in the Champions League - a record for a single season - and 31 goals in 20 league appearances.

Hegerberg, the 2017 BBC Women's Footballer of the Year, has three years left on her Lyon deal - a contract length rarely seen in women's football.

The midfielder led her country to five wins out of six in Women's World Cup qualifying and was named in the Women's Champions League squad of the tournament.

In July it was announced she had a pulmonary embolism, which occurs when a blood vessel in the lungs is blocked.

Marta (Orlando Pride and Brazil)
The 32-year-old has made the final three for Fifa's top award for the 13th time in her career and is looking to win for the sixth time.

She led Brazil to the Copa America in April, as they won all seven matches - although she only scored one of their 31 goals.

Marta scored 13 goals and set up six more as Orlando Pride reached the NWSL play-off semi-finals in the United States - earning herself a place in the league's team of the year.

The 2017 award was won by Zidane, with Claudio Ranieri winning in 2016 after taking Leicester to the Premier League title.

Fifa Puskas goal of the year
Gareth Bale and Cristiano Ronaldo are among the 10 candidates for goal of the year for their Champions League bicycle kicks for Real Madrid last season. Four nominees were World Cup strikes - Lionel Messi, Benjamin Pavard, Ricardo Quaresma and Denis Cheryshev.

Mohamed Salah's Premier League goal for Liverpool against Everton in a 1-1 draw in December is shortlisted. Also included are Riley McGree for Australian side Newcastle Jets, Giorgian de Arrascaeta for Cruzeiro of Brazil and Lazaros Christodoulopoulos for AEK Athens against Olympiakos, whom he has since joined.

View some of the goals here (UK only)...
Goalkeeper
The three nominees for goalkeeper of the year were all in the Premier League last year.

Gianluigi Buffon - then of Juventus and Italy - won the inaugural award last season.

Fifpro World XI
There are 55 candidates for the Fifpro World XI - including England trio Kyle Walker (Man City), Kieran Trippier and Harry Kane (both Spurs). There are 13 other current Premier League players are on the shortlist...

Fan award and fair play award
The options for the fan award are Sebastian Carrera - the only away fan in a Chilean second division game, Peru fans at the World Cup and Japan and Senegal supporters - a joint nomination after they cleaned stadiums in Russia.

There is no confirmed shortlist for the fair play award.