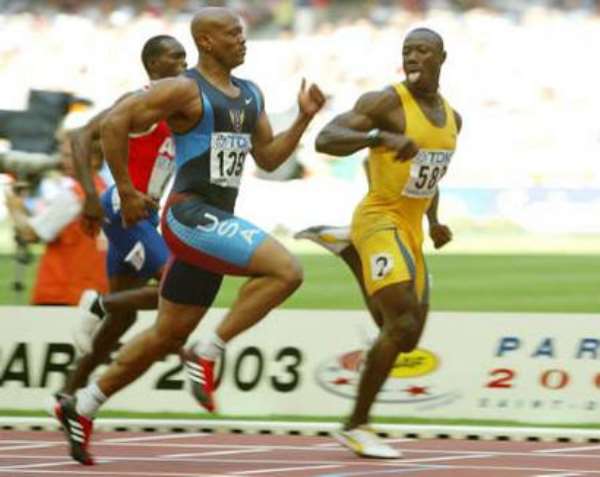 Two of Ghana's most reverend athletes Eric Nkansah and Mavis Akoto this morning stormed the offices of Kapital Radio to register their protest at the manner in which the Sports authorities in Ghana are threatening athletes They claimed that treatment of Ghanaian athletes is an eye sore, adding that they are not properly taken care of at all. Nkansah said there is no reason for the Technical Director at the Ministry of Education and Sports, Dr. Owusu Ansah, to have come out in a bid to react to the cry of Ignatius Gaisah as though he was lying.

”Let me tell you the truth, I have been complaining about the treatments meted out to athletes in the country for over eleven years and nothing seem to be done about our unbelievable shameful treatments."

"I decided not to commit myself to these complains any longer but I think that things are seriously getting out of hand so if Gaisah speaks out I think it is right. It is therefore disheartening for the Ministry to attempt to defend itself and behaving that all is right with athletes in the country” he added.

Nkansah said what is annoying is for Dr. Owusu Ansah to have made comments like even Aziz Zakari who won nothing was given $500.

"You see I was the next door neighbor to Aziz and a principal witness to the training programme before the finals in Helsinki, and I tell you it is more difficult to get to the final of any international competition. So for Aziz to have qualified to the finals is an appreciable achievement. So for Dr. Owusu Ansah to have made the comment as if Aziz did not merit the $500 leaves much to be desired.” he said

Fuming with rage Nkansah added ”I came into the country from Köln, Germany at the weekend and I am just coming from training at the Baba Yara Sports Stadium with other athlete in Kumasi and nobody is happy with the way we are being treated and that is the fact” he said.

If it takes $500 for Aziz to get to the final at the prestigious World Athletics Championships then let me make it clear to the authorities that I can pay that much to Aziz" he added.

He said through his own efforts he has been able to arrange sponsorship from PUMA for the athletes. Puma has been sponsoring me for some years now and I thought it right to arrange a sponsorship package with them in Helsinki, so I drafted in the Chairman of the Ghana Athletes Association Mr. Sandy Opoku Agyeman". It is now the turn of the Ministry to play their part in ensuring that Ghanaian athletes compete keenly with the rest of the world" Nkansah concluded.

On her part Mavis Akoto lamented the neglect of the athletes.

"At the last Olympics, in Sydney, I competed in the finals of the 4x100 with Vida Nsiah, Monica Twum and Veronica Bawua with Helena Amoako being on the reserve but ask the Ministry the whereabouts of all these athletes", she said.

She said whiles Vida Nsiah and Monica Twum have quit the sport, for lack of the needed support and living in the USA, Veronica Amoako is on a survival of the fittest mission in Australia.

Asked what she is doing now, Mavis Akoto said after the Olympics in Sydney she got married and now has a baby.

”I have however started training to come back to the sport", she said.

She said it is time for the athletes to call for massive recognition and support and the authorities must appreciate their cry and stop the PR aimed at saving their jobs.

High cost of formalisation contributing to galamsey menace –...
6 minutes ago