Steady Progress On The Pitch At Accra Sports Stadium 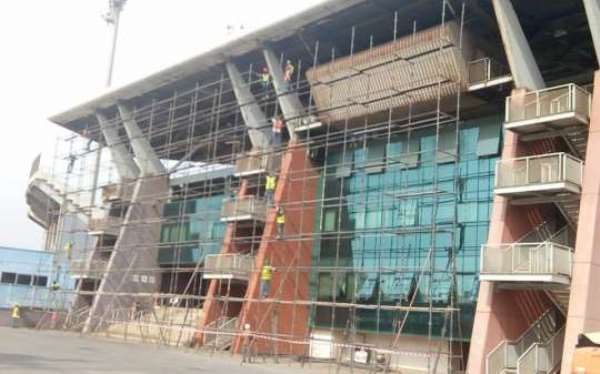 Restoration at the Accra Sports Stadium has seen progress lately as work is still ongoing in other to meet the deadline for the completion ahead of the African Women's Cup of Nations (AWCON), which is slated for November 17 to December 1, 2018.

A visit to the venue by GNA Sports, saw improvement on the pitch as workers were busily irrigating the grass, which has seen steady growth in the past two weeks

Due to time constraint for the Women's Championship, the surface of the pitch was only removed in other to replant and reshape the grass to a standard level, which can last up to a maximum of five years.

Some of the workers indicated that the grass takes about six to eight weeks to have it complete growth and standard, four weeks has already been spent and they are hoping for its final completion in next four weeks

The workers noted that the pitch is still going to be worked on when the Women's Championship starts, till it comes to an end adding that, it was the best way to maintain it.

Other improvements seen at the venue were the replacement of new LED flood lights and the score board, as they were at the finishing point

In addition, the discoloured chairs are being sprayed whiles those broken are yet to be replaced

Aside the Accra Sports Stadium, EL-Wak Stadium, Cape Coast and Presec pitch are expected to be used for the 2018 African Women's Cup of Nations which would be held in Ghana.