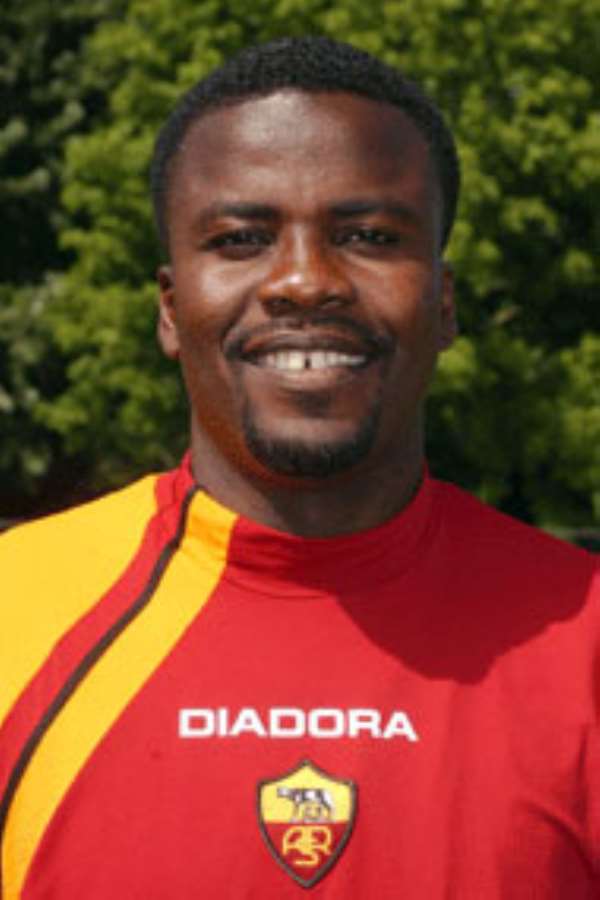 Many people doubted Kuffour abilities, when Roma bought the defender. However, after a few games, the Roma Tifosi love him already. Kuffour is getting praises from all sides. From the coach, the media and his team mates. The fans are convinced to have found a new chief in defence. And they already compare him to a previous idol.

A pass to the strikers. The no. 4 is faster than the striker. Once again. Continue going forward, then directing the defenders by side. Everything under control. "It's incredible. Is Aldair back yet?" Mario jumps "Aoooh! You are a phenomenon!" This just had to go out of him. Mario, very satisfied, gets back to his seat again and applaudes. The air is sticky in the Roman Curva Sud. Mario is sweating, a cross, the number four clears. Mario: "Magic" And the whole Curva Sud: "Kuffour Kuffour"

Sammy Kuffour needed three games for AS Roma before becoming the fans' darling. He is the most loved together with "il capitano" Frascesco Totti and the other newcomer Shabani Nonda. Up to date withouth errors in defence, undisputed defensive chief, loud motivator, constantly best marks and waves of applause when in action. "Nobody expected Kuffour that strong", Daniele Lo, chief correspondent at the daily AS Roma newspaper "Il Romanista". "And to be honest, nobody understands why Kuffour came for free"

Totti already knew after pre-season preparations: "This time we will see a different AS Roma "Kuffour will make the difference, he is our fundament. Just like Samuel" Walter Samuel. Samuel Kuffour. Not only the pre-name makes the Roma fans think of the Argentinian rock that controlled the defence for four years. After a doubtful season in Madrid he is now kicking balls up in the north with Inter.

Anyway, for Mario and friends, Kuffour is just the new Aldair. After 13 seasons at Roma, the Brazilian left in 2003. The fans are still honouring their "Pluto" with songs these days. They think to have found the longly awaited successor and quickly baptised Sammy the new "Black Wall". Not baseless. Roma conceeded only two goals in the first five games, in the UEFA Cup even only one (by 30th September 2005). The opponents were happy to play against the yellow-reds in the previous season. Crosses, Shots, Dribbling. The most important was to go into the Roma box and celebrate. At the end, Roma had the fifth worst defence in Italy with 58 conceeded goals.

All history. Coach Luciano Spaletti: "It is incredible what anticipation and concentration Kuffour shows up to the last second." And the serious Roma daily newspaper "Il Messagero": "The goals are not being conceeded like avalanches. And Kuffour is the main element in this transformation"

The 29-year old is still communicating through sign language with his defending colleagues. Italian is still not coming through his lips. "This will happen soon" the ex-Bayern player says. "I'm lucky with the town and this club." He loves the "Piazza di Spagna" The people in the town centre are passionate "Super Sammy! Forza Roma!" "I can't believe this passion. I never whitnessed that in Germany" It is just left with a confortable home. "My wife will choose that" She is already searching. In the nice and rich suburb of EUR near the Roma training center "Trigoria" where most footballers have settled in. Totti also lives there and takes good care of Kuffour for weeks.

Totti, captain and UNICEF Ambassador even plans bigger projects with the Ghanaian. For example a football development project in Africa. Kufour says with shining eyes: "I'm not interested in politics, but football can help Africa such as the music does. It is a briliiant idea."

Kuffour has found new luck even though there was a lot of criticism after the transfer became public. Questions and suspicions went through the papers and the bars: why only 7 league games last season? Why for free? He is too fat. Too satisfied. Bayern only wants to get rid of him. ....

Kuffour already earned the first respect when he stressed his will to stay despite the FIFA tranfer ban. Sammy insisted: "I have better offers, but I want to play for Roma by all means" After that he earned more respect after Totti praised him. He proved all last doubters wrong.... with his performances on the pitch. Gazzetta Dello Sport's verdict: "Not even a canon ball can push the chief of defence by side"

Final whistle. Mario is not sitting anymore for a long time. Parma was sweeped 4:1 out of the Olympico. After Nonda's last goal in the 90th , Kuffour did a 90m sprint to party with the Burundian under the Curva Sud. And to dance. Sammy raises the hand to the crowd "Aooooh, fenomeno!" Mario likes Kuffour. Die yellow-red wall around him too.

The myths come fast in this town. A few stay, many disappear. As usual, Kuffour is the last to leave the fans from the Curva Sud. As usual he disappears alone between the South Curve and the Main Stands into the Catacombs. Just like Aldair did.