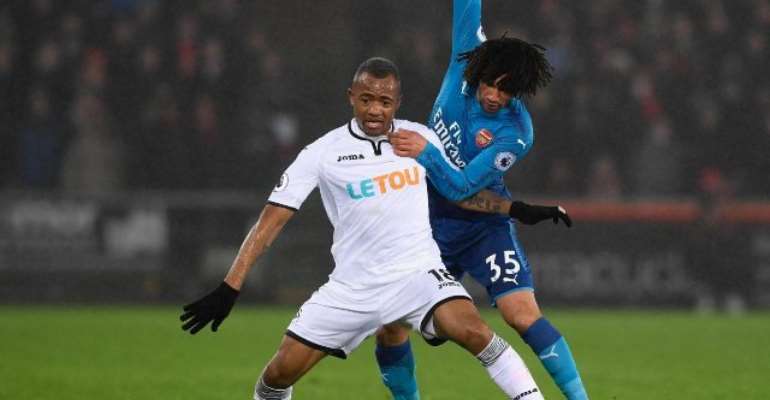 Jordan Ayew has completed a loan move to Crystal Palace following Swansea City’s relegation to the Championship – and the Swans fans are delighted.

The striker sealed a deadline day move back to the Premier League on a season-long loan.

A loan fee will be paid from the London side to the Swans for the services of the Ghana international.

Ayew signed for the Welsh side back in January 2017 from Aston Villa and after much speculation during the summer, has moved to Selhurst Park.

Last year’s players’ player of the season at the club scored 11 goals but could not save the Swans from relegation to the second-tier.

Prior to his loan move, Ayew refused to train for the first-team in the hope of forcing through an exit from the Liberty Stadium.

The last five teams the 26-year-old has been at have all been relegated, which does not bode well for Palace.

Here is how the Swansea City supporters reacted on Twitter to the departure of the want-away striker.

Glad he’s found a new place to sulk at, good riddance to the worst attitude I have seen in football for years.

Mercenary. We are well shot of him #swans

The only swans player I wished we did sell and we loan him, typical.

Good Luck at Palace, you need it, you have shown no loyalty to a club that gave you a chance, hopefully you get relegated for the third time!

Please dont ever come back. #breakaleg