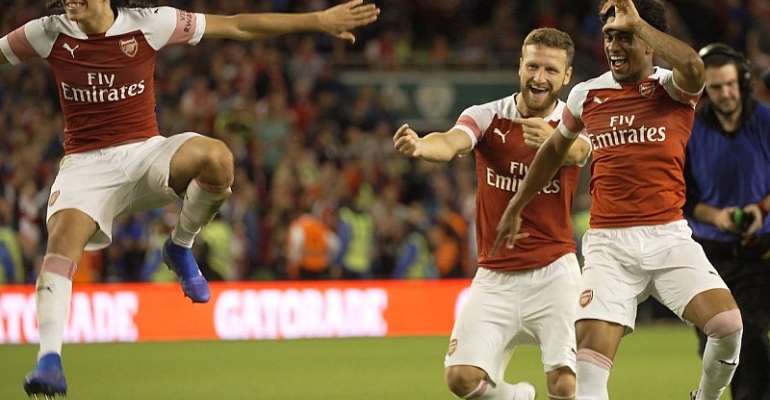 Petr Cech saved penalties in normal time and in a shootout as Arsenal beat his old club Chelsea in the International Champions Cup in Dublin.

The Gunners' keeper denied Alvaro Morata from the spot in the first half as the Blues dominated, with Antonio Rudiger heading them in front.

Arsenal improved after the break and Alexandre Lacazette equalised with 17 seconds left to earn a shootout.

Both sides scored their first five, but Cech saved from Ruben Loftus-Cheek.

Maurizio Sarri's Chelsea side face Premier League champions Manchester City at Wembley on Sunday in the Community Shield, while Arsenal boss Unai Emery has injury worries before the new season after losing both Aaron Ramsey and Sead Kolasinac.

Ramsey, who was listed on the team sheet to start, suffered a muscle injury in the warm-up and was replaced by 18-year-old Emile Smith Rowe in the starting XI.

Kolasinac appeared to hurt his knee in a challenge with Victor Moses and will have a scan.

New Chelsea faces impress
Chelsea were far brighter in an open and lively first half at the Aviva Stadium, with teenager Callum Hudson-Odoi at the heart of all of their good work.

His fine run in behind set up Cesc Fabregas for a shot which Cech tipped over, before the Arsenal defence left Rudiger completely free from the following corner to head home from 12 yards.

Hudson-Odoi then tricked Hector Bellerin into conceding a penalty with a clumsy challenge, but Morata's tame effort was easily saved.

Morata looked short of confidence all night, with the centre-forward role maybe causing Sarri the most problems in his squad as he enters his first season in England.

Hudson-Odoi was then denied by another great Cech save before the break, and though the youngster faded he was easily the most impressive player on display.

Others to catch the eye for the Blues were £50m midfield signing Jorginho and substitute goalkeeper Marcin Bulka, who saved well from Alex Iwobi and Lacazette late on.

"We had our first training on 16 July and we are late compared to Arsenal on the physical condition," said Sarri.

"We have done very well in the first half and then we made a mistake in the last minute."

Asked about the future of Hudson-Odoi, the Chelsea boss added: "He will be a very, very strong player. "Will he be in the first team squad? I think so. He will be staying with us for all the season."

Better late than never
Arsenal also had new faces on display, with Emile Smith-Rowe again playing well after he came into the starting XI at the last minute for midfielder Ramsey, who was injured in the warm-up.

Matteo Guendouzi - signed from the French second division - continued his fine pre-season with another confident showing, and Emery will surely be pleased with his side's second-half display.

Lacazette and Iwobi both failed to make the most of their late chances, but the French striker finally found a way through in stoppage time when he steered in Reiss Nelson's low cross from close range.

"We are very happy with the 90 minutes because the performance got better during the match," added Emery.