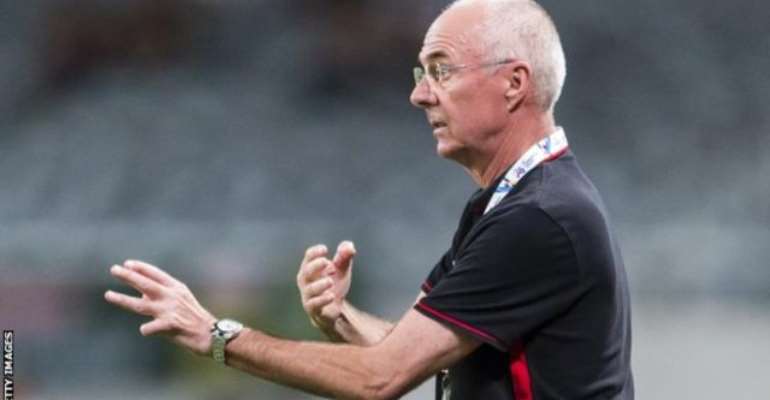 Cameroon have confirmed discussions with former England manager Sven-Goran Eriksson to take over as coach of the Indomitable Lions.

The Swede, 70, held positive talks with Cameroon Football Federation (Fecafoot) officials in Yaoundé last week, as they seek to fill the vacant post following the exit of Hugo Broos.

"The Swedish manager was invited to Cameroon for a discussion in connection with the recruitment of a head coach for the senior national side - the Indomitable Lions.

"After the interview with Sven-Goran Eriksson and taking into account the other existing offers, Fecafoot will reveal in the next few days its choice of permanent coach for our national team," Fecafoot added.

Eriksson, who managed England between 2001 and 2006, taking them to the World Cup quarter-finals on two occasions, was not among the 77 applicants revealed in April.

BBC Sport understands that Eriksson, who had previously managed English clubs Manchester City and Leicester City, will earn CFA 50 million (€71,000) monthly and will work with a Cameroonian assistant and live in the country.

Local media have also linked Dutch duo of Clarence Seedorf and Patrick Kluivert with the post.

Eriksson previously coached Mexico and led Ivory Coast to the 2010 World Cup in South Africa before taking charge of Chinese side Guangzhou Evergrande in 2013.

Further spells followed in China with Shanghai SIPG and Shenzhen, before he left the latter in June 2017.

Cameroon's coaching job became vacant in February when Hugo Broos, who led the Indomitable Lions to a fifth Africa Cup of Nations title last year, departed at the end of his contract.