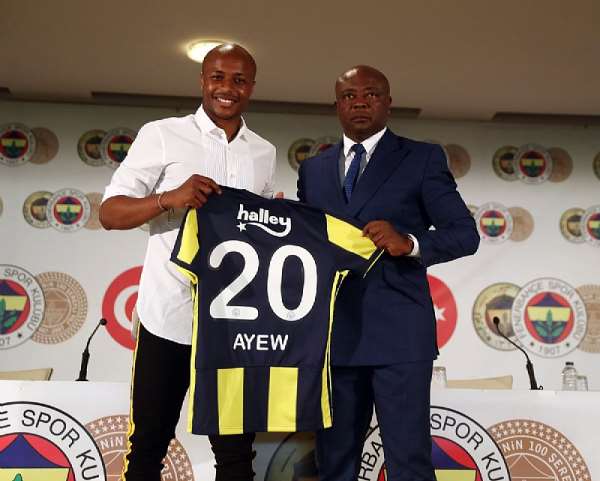 The Ghana international joined Fenerbahçe S.K. on a year season loan from Championship side Swansea City with an option of making the deal permanent.

Andre rejoined the Welsh-based side on January from West Ham United on a club record of 20 million pounds.

However, he failed to find the back of the net after 12 matches played in the English top flight.

The Swans were eventually relegated to the Championshi[ after finishing 18th on the Premier League log.

The former Olympique Marseille forward left Swansea pre-season tour in Austria to complete his move to Turkey on Thursday.

And after completing his move on Friday afternoon, many Ghanaian football fandoms took social media to wish the deputy Black Stars well.

Imagine @AyewAndre playing against Asamoah Gyan in the Turkish Lig.

Article loading on implications of the latest move. pic.twitter.com/M7jrRFlCHU

Why not? Congrats bro @AyewAndre❤️❤️ when you have Allah with you all things are possible , new chapter new challenge @Fenerbahce #allahisgreat#alhamdullilah 🙏🙏🙏 pic.twitter.com/xMf76g12Um

Andre Ayew and his father Legend Abedi Pele after signing for Fenerbahce pic.twitter.com/hordyy8bwE

Andre Ayew to Fenerbahce on loan.Hopefully he recaptures his form there. And taxes also don't bite there so pocket will be nice. https://t.co/E16OXzttci

My brother welcome new home , welcome to Fenerbahçe . Millions of fans welcoming you. It is a new Story and will be an amazing one with the best fans in The world... @andreayew10 @fiifitackie #fatherandson #enbuyukfener #ulkerstadium

New chapter bro! Wishing you a great season and many more to come 🙏🏼❤️ @andreayew10 @fenerbahce