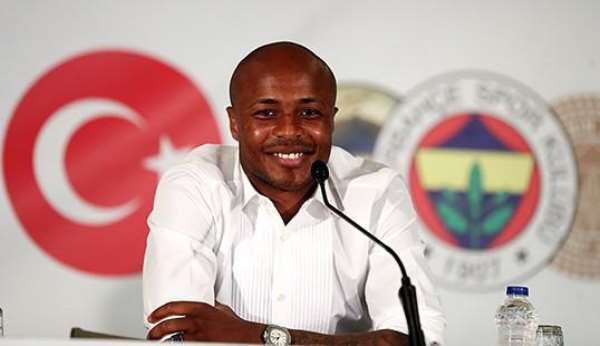 Fenerbahçe SK new signing, Andre Ayew says his ultimate aim is to help the club to win the Turkish championship.

The former BBC Africa player of the year award winner completed his move the Turkish side on Friday on a season loan deal from English championship side Swansea City with an option of signing the player on a permanent deal.

Ayew was unveiled on Friday afternoon after passing his mandatory medical.

Speaking to the press, the Ghana international said, “My only goal is to live in the championship with Fenerbahce” “Fenerbahce fans are the most excited about me right now,” Ayew said.

"The thing that excites me is the size of this club. My only goal is to be champion at the end of the season Fenerbahce

"Fenerbahce fans are the most excited about me right now. I still remember the match we played here in Marseille. The fans were amazing that day. Can’t wait to see.

"I have been meeting Bafetimbi Gomis for a long time, I see, he will always be my brother, but we both will play for the win, now he’s playing for the other side of the city, it will be exciting to play against him”.

Quizzed whether he spoke to Stephen Appiah before finally making his mind to move to Turkey, he said, "Stephen Appiah, manager of our national team. I talked to him before I came here. He definitely told me to come here.”

"I came to a new country, but before that, I played in many different teams and countries. I’ll be quick to get through the harmonization process.”

"Damien Comolli called me the day he came to the office of Fenerbahce called me and asked ‘ would you like to come to a big hut and a big project? ‘I said, “Yes.

"Since I was a kid, I call myself “Andre, push the boundaries.” If a footballer wants to achieve great achievements, he should be able to enter the eyes of his teacher in different positions. But I like to play on the wings” Ayew added.