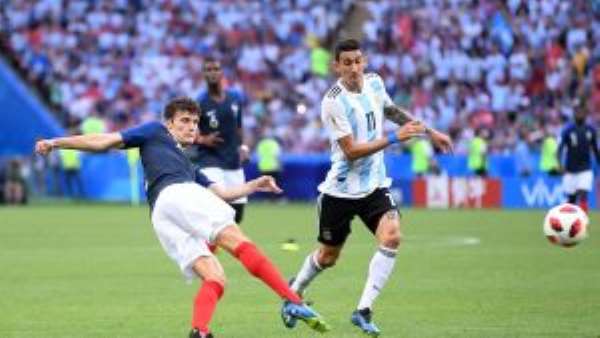 treated football lovers to 169 goals in 64 matches – and fans around the world have chosen Benjamin Pavard’s as the best of the tournament.

In an online poll where over three million FIFA.com users casted their votes, Pavard’s outside-of-the-foot rocket for France against Argentina, in which the 22-year-old displayed marvellous technique, has been voted the Hyundai Goal of the Tournament.

The goal selected by FIFA.com users was France’s equaliser against Argentina in the Round of 16, which levelled the game at 2-2 as Les Bleus went on to record a 4-3 victory in Kazan and book their place in the quarter-finals.

“The ball bounced up as it came to me. I didn't even think about it. I just tried to get over it and keep it down,” Pavard told FIFA.com after France’s Round of 16 thriller with Argentina.

“I was trying to hit it in the direction it came from, which is what the strikers always tell me. I didn't think it over, and when it went in I just felt so happy.”

Pavard’s goal saw off stiff competition to win the accolade, including Juan Quintero’s delightful low free-kick for Colombia against Japan in the group stage which finished second, and Luka Modric's long-range stunner against Argentina, also in the group stage, which came third in the voting.

Pavard becomes the first European player to win the Goal of the Tournament accolade since its creation in 2006. At Brazil 2014, it was bestowed on eventual adidas Golden Boot winner James Rodriguez, whose venomous, dipping volley also later earned him the 2014 FIFA Puskas Award.

Other previous winners include Maxi Rodriguez (ARG) and Diego Forlan (URU) winning in 2006 and 2010 respectively.

Government to reclaim mined-out areas in Ghana
42 minutes ago