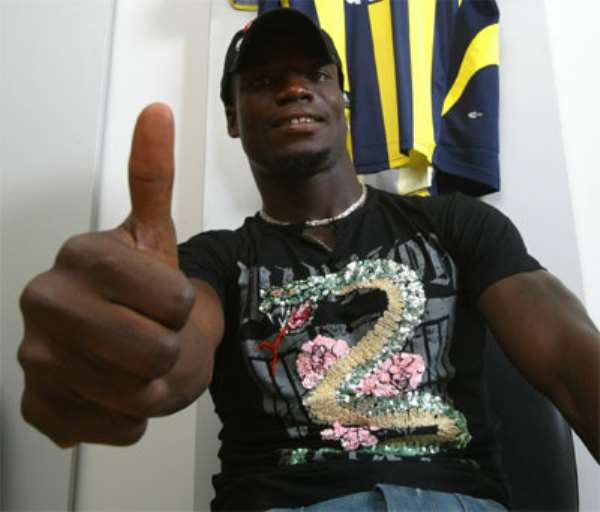 Sulley Muntari makes a return to the Black Stars for their last world cup qualifier against Cape Verde as national coach Ratomir Dujkovic names his squad. The Udinese attacker missed out of the team's last game at home to Uganda's Cranes due to suspension. However, Roma defender Sammy Kuffuor will be absent from he side. Djukovic, who had fallen out with the central defender over disciplinary matters, did not include him in the 22-man squad named for the away tie in Praia. Also making a return is Asamoah Gyan. The Italy based striker has been left out of the squad for the last two world cup games. Enyimba's Joe Tex Frimpong who returns from injury is picked ahead of Isaac Boakye who has been dropped. Holland based midfielder Yakubu Abubakari has also received a call up for the game in Praia. Dujkovic would name the local component of the team who travel next week to Portugal to team up with foreign-based colleagues. Joy Sports enquiries reveal that Accra Hearts of Oak's Dan Quaye is a surprise inclusion to the team ahead of Kotoko's Aziz Ansah. Dan Quaye last featured for the Black Stars during the reign of Mariano Barreto when Ghana beat South Africa 3-0 in Kumasi. Ghana will have a three-day training camp in Portugal, ahead of the Cape Verde clash on 8 October. The players are expected to assemble in Lisbon on 3 October, before flying to Cape Verde. The Black Stars will not play any friendly games in Lisbon ahead of the Praia game. The Stars top the group with 18 points, three more than South Africa and DR Congo, who have 15 points each. Ghana needs just a point in Praia to seal a first ever world cup place.