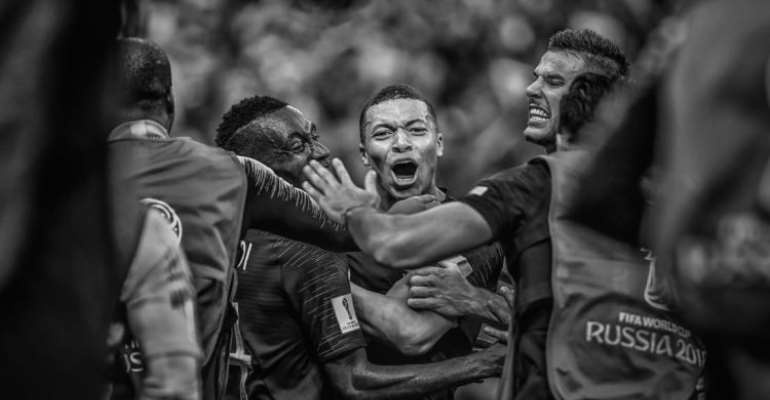 519 centimetres made Luka Modric (1.72m), Eden Hazard (1.73m) and Antoine Griezmann the smallest combined height of the adidas Golden, Silver and Bronze Ball recipients since Toto Schillaci, Lothar Matthaus and Diego Maradona had merely 512 centimetres between them in 1990.

135 years and three months was the cumulative age of Uruguay’s Oscar Tabarez and Portugal’s Fernando Santos when they met in the Round of 16 – the oldest combined age for two coaches in a World Cup match. Tabarez and England’s Roy Hodgson had a combined age of 134 years and two months when their teams clashed at Brazil 2014.

72.5 kilometres is what Ivan Perisic covered during the tournament – more than any other player. Xavi (80km) and Thomas Muller (84km) ran unprecedented totals at South Africa 2010 and Brazil 2014 respectively.

48 years had passed since a team had overturned a two-goal deficit and won a knockout-phase match at the World Cup until Belgium rallied to stun Japan 3-2. The last had been West Germany, who came from two goals down to edge England 3-2 at Mexico 1970, albeit with the aid of extra-time.

40 years have passed since a World Cup Final was without a player from Bayern Munich or Inter Milan. The German giants had their status preserved by Corentin Tolisso coming on for France against Croatia, who started Marcelo Brozovic and Ivan Perisic of I Nerazzurri.

21 hours and 10 minutes is the combined total Lionel Messi and Cristiano Ronaldo have, staggeringly, gone without scoring in the knockout phase of the World Cup. The Argentinian and the Portuguese have made eight and six appearances in the knockout rounds respectively.

18 matches is what Asian sides had gone without beating South American opposition in the World Cup until Japan bucked the trend with a 2-1 defeat of Colombia.

14.3 per cent gave David De Gea, the pre-tournament favourite for the adidas Golden Glove, the lowest save ratio at Russia 2018. The 27-year-old made only one save and conceded six goals in four appearances. Kasper Schmeichel admirably saved 91.3 per cent of the shots he faced (21 of 23) – higher than any other goalkeeper who played more than one match.

12 own-goals were registered at Russia 2018, doubling the previous record of six, set at France 1998. Morocco’s Aziz Bouhaddouz netted the latest one in World Cup history in the 95th minute against IR Iran; Sergei Ignashevich, just before his 39th birthday, became the oldest player to score an own-goal in the competition and ensured three straight Russia matches involved one; and Mario Mandzukic posted the first one in the Final.

10 Belgians scored at Russia 2018, equalling the record for most marksmen from one country at a World Cup shared by France in 1982 and Italy in 2006.

7 consecutive World Cups have ended in Mexico suffering Round-of-16 elimination. In seven-and-a-half hours of action against Brazil in the competition, Mexico have failed to score and conceded 13 times.

5 teenagers have now scored multiple goals in a World Cup game after Kylian Mbappe became the first since Pele 60 years ago to achieve the feat. The 19-year-old Frenchman then became the third teenager to appear in the tournament’s decider, after Pele and Giuseppe Bergomi in 1958 and ’82 respectively, and the second to score in it after ‘The King’.

4 saves in World Cup penalty shootouts is what Danijel Subasic became the third goalkeeper to make following West Germany’s Harald Schumacher and Argentina’s Sergio Goycochea. Croatia, who went past 90 minutes against Denmark, Russia and England, became the second side to go to extra-time in three consecutive ties in the competition after England in 1990.