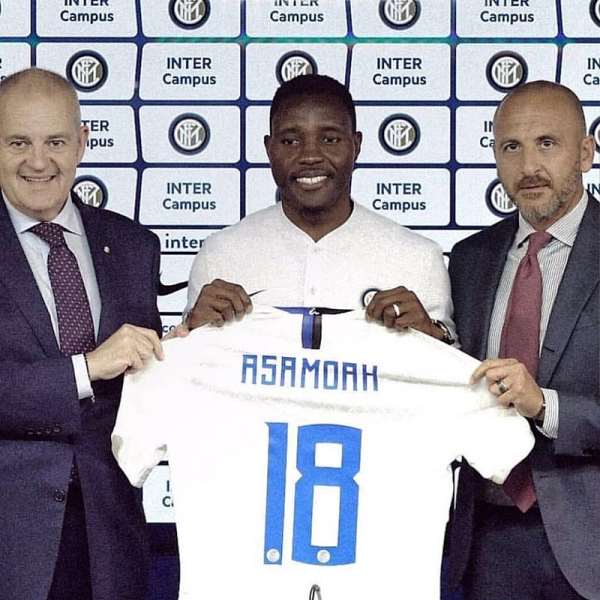 Asamoah, 29, joined the Nerazzurri on a three-year deal as a free agent after failing to extend his contract with Serie A champions Juventus.

The versatile enforcer becomes the fourth Ghanaian to join the Milan-based powerhouse.

The first on the list is Sulley Muntari, who arrived at Inter on 28 June 2008 for â‚¬14 million from Portsmouth. He scored his first goal with the Nerazzurri shirt on his debut in the Italian Super Cup against Roma. On January 29, 2011, after winning the Treble, he was transferred to the Sunderland - making 9 appearances, but at the end of the season, the Black Cats decided against purchasing him, and then returned to Milan. At Inter he collected 66 appearances and 7 goals winning a Champions League, two Scudetti, an Italian Cup, two Italian Supercups and a Club World Cup. He left the Nerazzurri on 31 January 2012 to move to rivals AC Milan.

Other Ghanaian Isaac Donkor joined Inter in 2012. On November 22nd of the same year, he made his debut in the first team in the Europa League match against Rubin Kazan, while the first team he played in the Europa League against Qarabag on 11 December 2014. In June 2015 he was loaned to Bari, before joining Avellino again on loan in July 2016. In January 2017 he moved to Cesena, permanently in the summer after spending a loan there the season before. In the Nerazzurri, he made 2 appearances and 0 goals.

Last but not least, Alfred Duncan, who arrived at Inter in 2010, but he officially when he turned 18. He joined during the spring season with which he won the league in the 2011-12 season and the Next Generation. He made his debut in Serie A on August 26, 2012, against Pescara. He moved on loan to Livorno in the 2013-14 season and then moved permanently to Sampdoria on January 31, 2015, after moving on loan first. At the moment he wears the Sassuolo shirt. In the Nerazzurri, he has collected 3 appearances and 0 goals.

Kwadwo Asamoah, who arrived after the expiry of his contract with Juventus, is now taking their place. He chose the jersey number 18 and was presented earlier this week at the Appiano Gentile training ground. He is already showing his desire to start this new adventure in the Nerazzurri shirt, leaving behind his past with Juventus.