Argentina Manager Sampaoli's Future To Be Reviewed At End Of July 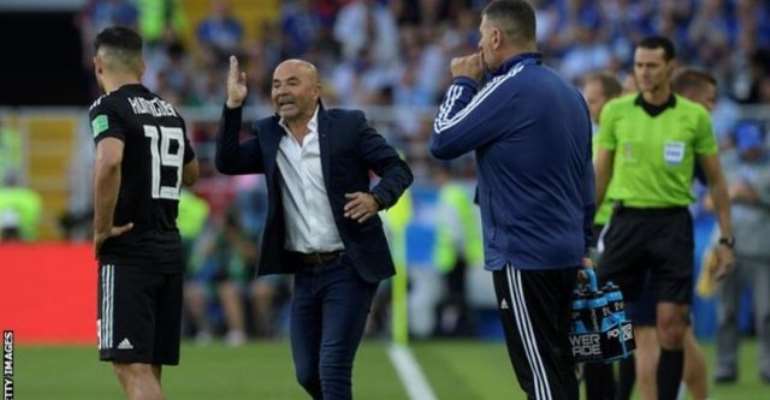 Jorge Sampaoli's future as Argentina manager will be reviewed at the end of July, after they were knocked out of the World Cup at the last-16 stage.

Sampaoli, 58, was expected to depart after the 2014 finalists edged through the group stage before losing 4-3 to France in their first knockout game.

But he will now take charge of the national under-20 side at a tournament in Spain from 28 July.

Argentina next face Guatemala in a friendly on 6 September.

It was agreed Sampaoli would take charge of the under-20 side after assistant Sebastian Beccacece left the national team to take over at Brazilian top-flight side Defensa y Justicia.

The AFA will have a further meeting to discuss his future at the end of July.

Sampaoli, a former Chile coach, took charge of his home country in May 2017 and the team only scraped through qualifying for the World Cup.

Argentina then progressed from the group stage in Russia with an 86th-minute winner over Nigeria in their final game.

That came after they drew their first game 1-1 with Iceland before a 3-0 loss to Croatia - their heaviest defeat in the group stage of a World Cup since losing 6-1 to Czechoslovakia in 1958.

It was also the first time the two-time World Cup winners had failed to win either of their opening two group-stage matches since 1974.

Sampaoli has seven wins, four draws and four defeats from his 15 matches in charge.