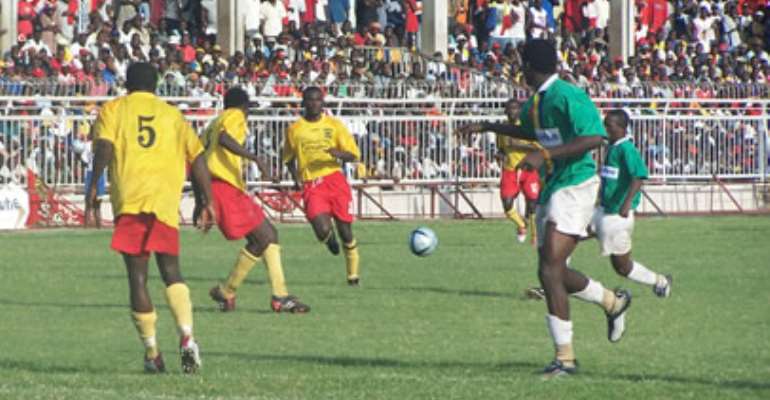 Champion club,Accra Hearts of Oak, will engage Dansoman-based Liberty Professionals in a tight duel at the Ohene Djan Stadium in Accra this afternoon.

The Phobians, who have their eyes on the league trophy, will be seeking to cause a stir in the camp of the Panasonic lads as the Prince Tagoe-led attack will be out to give them a taste of their predatory prowess.

The Tema Park will be another centre of attraction as current league leaders, Kumasi Asante Kotoko, travel from their Oseikrom base to battle Power FC in another thrilling encounter.

The Tema Stadium which has been described as a 'banana peel' for the Porcupine Warriors makes the game more interesting as history may be repeated.

Power FC held Kotoko to a 1-1 draw in their first round clash in Kumasi.With their defeat in Morocco which has nearly dashed their hopes of advancing in the CAF Confederation Cup still fresh on their minds,King Faisal will seek to console themselves with a return to the top of the GT Premier league as they play Berekum Arsenals at the Baba Yara Stadium this afternoon.

Faisal who have an outstanding match with RTU, will have to play a determined game as the Berekum lads will be seeking to add them to their list of victims,an assignment which will be spearheaded by their dangerman, Alex Asamoah and his fellow team mates.But Faisal will prove themselves to be tough customers since they will go into the game as wounded lions seeking someone to devour.

Ashantigold will travel to Swedru to engage Feyenoord FC in another encounter. The miners will not throw caution to the wind as they will seek to get back to their winning ways, bearing in mind the opposition that awaits them.

Bottom-placed Kade Hotspurs host Okwawu United in an encounter that can be described as the clash of the relegation-threatened as both teams have slim chances of staying in the league.

Tano Bofoakwa welcome Kpando Hearts of Lions to the Sunyani Coronation Park in a game which the Sunyani lads must win to appease their fans after losing to Kotoko at the Baba Yara Stadium in their last league match.