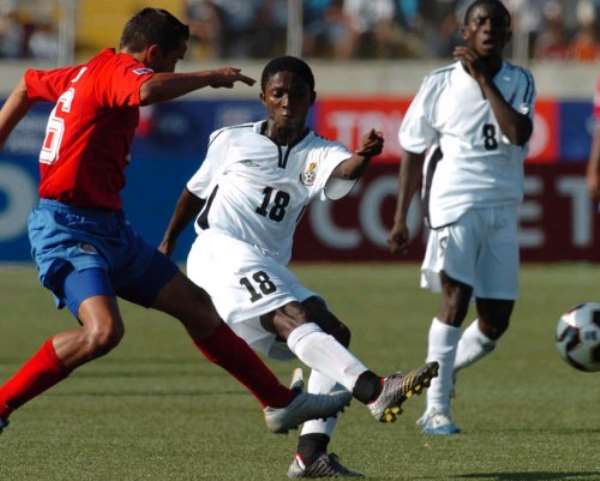 There was no separating Ghana and Costa Rica as their Group A clash on match day two of the FIFA U-17 World Championship Peru 2005 ended 1:1. Both teams have two points from two matches and identical goal ratios after a West African set-piece cancelled out Costa Rica's opener to ignite what was a somewhat cautious affair in the first half.

Both teams made a solitary change from their opening matches: Ghana surprised everybody by leaving Sadat Bukari on the bench in favour of striker Awudu Abubakar, who appeared as a second-half substitute in the previous game. Costa Rica handed a start to Cesar Elizondo, relegating Luis Cordero to the bench.

The 12,000 fans in attendance witnessed a nervous start to the encounter, both teams evidently realising the importance of the tie.

Ghana took the initiative in the opening stages, but it was Costa Rica who created the first opportunity, Celso Borges testing Ghanaian goalkeeper Nana Bonsu with a 20-yard effort (11'). The Central Americans were dealt an early blow when Cesar Elizondo was forced to retire from the proceedings through injury after just 22 minutes. Undeterred, the Costa Ricans continued to take the game to their opponents. Jean Solorzano tried his luck on the turn only to see his shot go wide of the post (27'). Foiled by the well organised Costa Rican back line, the Africans struggle to impose themselves on the game and create any offensive openings as the game reached a half-time stalemate.

If the first half was quite uneventful, the second period was anything but. An Esteban Rodriguez corner was met by the head of Borges from six yards to give Costa Rica the lead (1:0, 47'). The West Africans reacted instantly, captain Emmanuel Ansong shooting wide on 51 minutes. However, it was not long before Ghana were rewarded for the endeavours, Jonathan Quartey finding the direct route past the Costa Rican defence with a 20-yard free-kick (1:1, 58'). Ghana launch counter-attacks Costa Rica stepped up their offensive but only succeeded in creating openings on the break for Ghana, who were now playing without restraint, and sacrificing their defensive organisation. Opoku Agyemang spurned a gilt-edged chance to give Ghana the lead after 73 minutes while Guillermo Guardia's effort with the outside of the boot was narrowly wide just two minutes later. Ghana stepped up the pace yet further in the final quarter of an hour, Dave Myrie clearing a fierce George Appiah effort on 84 minutes. James Tagoe then fired a long-range rocket just over the bar (85'). Costa Rica could also have secured a late victory with a little more luck and less defiance from their opponents' defence.

Ghana meet China in their final group game on Thursday, while Costa Rica take on Peru.

Ghana coach David Duncan could barely hide his disappointment on the final whistle: "I am not at all happy with the result. We simply could not convert our chances. It is almost ironic when you consider we had over 60% of the possession in the first half."

His Costa Rican counterpart Geovanny Alfaro had a slightly different outlook on the game: "I am very happy with the 1:1. My players were a little too attack-minded after taking the lead but the result gives us every chance of reaching the quarter-finals."