Eastern, Volta Regions Show Off Impressive Skills In Rexona 'Be The Next Champion' Finals 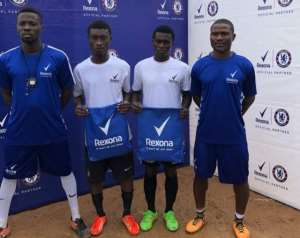 The Rexona ‘Be the Next Champion’ train stopped at the Eastern and Volta regions to scout for football talents to compete in the grand finale in Accra next month.

The regional preliminaries attracted hundreds of aspirants from both regions who came to show the scouts what stuff they were made of.

At the Koforidua Methodist Park in Koforidua Poly, the aspiring stars went through drills and played an aside match.

The Volta Regional event which came off at the Police Depot Park in Ho saw the young footballers demonstrate their skills and abilities which qualifies them for the July finals in Accra.

Laryea Kingston, the official coach took the players through several physical drills and trials to evaluate their capabilities.

Laryea Kingston diving directions on the field of play

At the end of the skills competition, Alex Agyakwa and Samuel Agyemang emerged winners to represent the Eastern region while Obed Nyadroh and Justice Atiemoh were selected to represent the Volta region.

"The footballers had a fantastic time as the atmosphere at the parks were charged with a lot of cheers and energy. We are impressed by the standard of the competition as well as the excellent performance demonstrated by aspirants," Laryea noted.

The winners of the two regions were full of excitements and expressed their gratitude for the opportunity given to them by the organisers.

The next stop is in Kumasi where the Red Park (at Asawasi) comes alive with aspirants trying their luck on June 29, and June 30, at Sakraska Park at Abuabo.