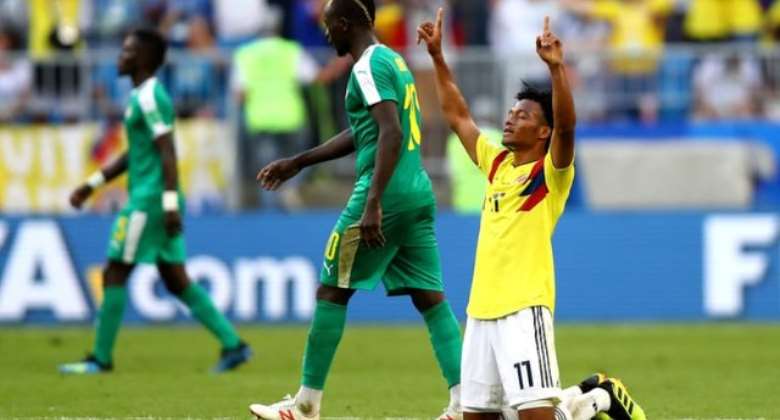 Yerry Mina's second-half header sent Colombia into a last-16 tie of the 2018 World Cup at the expense of Senegal, who lost out to Japan having received more yellow cards.

Five thoughts from the game
SENEGAL’S STRATEGY
Senegal utilized their pace and strength effectively. In the first half, Senegal closed down the Colombians quickly. That prevented the Colombians from making any worthwhile attacking incursions in their defensive third. Danger man Juan Cuadrado was heavily watched by Sabaly Youssouf and Kalidou Koulibaly.

This nullified the attacking threats of Cuadrado and made him anonymous during the entire first half. The Senegalese players were also very calm and composed in possession and didn’t misplace a lot of passes like we saw against Japan. Senegal’s organization in the first half was so efficient such that in the entire first half, no Colombian player touched the ball in Senegal’s penalty area. In the second half, the intensity of Senegal’s play dropped.

This allowed the Colombians to control the game and that was Senegal’s undoing. Senegal didn’t close down the Colombians as quickly as they did in the first half. Senegal was more laid back until they conceded the goal. After conceding the goal, Senegal added a bit more speed and urgency to their play but it was too little, too late.

SENEGAL AND SET PIECES
In the first half, Senegal had 4 free kicks in promising areas around Colombia’s defensive third but the delivery left much to be desired. All of those deliveries didn’t threaten the Colombian defence. Set pieces are definitely genuine chances for scoring goals and it is very worrying when you are unable to pose any real threat from them. When you consider the height of the Senegalese team, it becomes more surprising.

THE AFRICAN MENTALITY STRIKES
The worrying trend of the African teams conceding late goals, especially via set pieces continued. In the 74th minute, Yerry Mina was left unmarked as he rose to power in a header. Lack of concentration and a lack of efficient defensive strategies especially during set pieces has been the downfall of Africa in this world cup. That was the 8th goal conceded by an African side via a set piece and it is a very disturbing statistic.

WHY JAMES RODRIGUEZ WAS SUBSTITUTED
Rodriguez couldn’t match the strength and pace of closing down from the Senegalese. This made him ineffective as he was denied space and time to pick out his defence-splitting passes. Radamel Falcao was also heavily marked by the Senegalese defence. This prompted Jose Pekerman to take him off and go for more physicality and another attacking outlet upfront by bringing on Muriel Luis.

SENEGAL’S LACK OF POTENCY UPFRONT
Senegal scored 4 goals in 3 games. Only 1 of the 4 goals scored was as a result of a well-worked play. The remaining 3 goals can be attributed more to “luck” than to potent attacking play. Senegal’s problem has been an inability to create genuine goalscoring opportunities when they get into the opponent’s defensive third.

Five die in accident on Techiman –Tuobodom highway
36 minutes ago