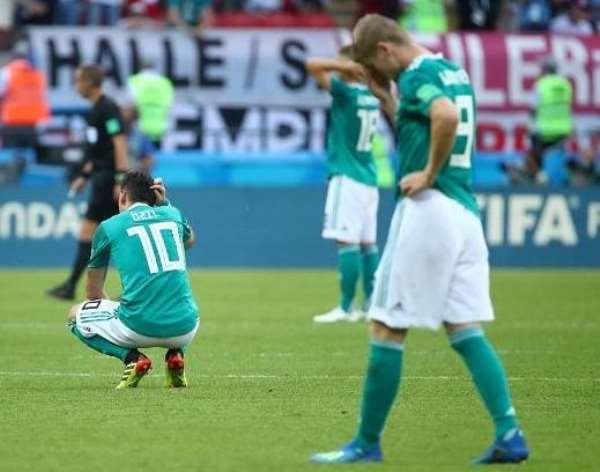 Winning the World Cup puts so much pressure on countries in the next tournament and it is becoming a poisoned trophy with Germany now the third-straight holder to exit the competition at the group stage, joining Italy and Spain.

Germany, who lifted their fourth title in Brazil four years ago, had to bow out of the competition with defeats from to Mexico and South Korea in a group that many pundits ticked them to come out scattered.

Joachim Low's men have suffered the embarrassment of finishing bottom of Group F, as Sweden surprisingly topped the group, with Mexico runners-up and making it through to the round of 16.

Having won the title in 2006, Italy finished rock-bottom of their group in 2010 before Spain, who won in South Africa, failed to make it through the first stage in Brazil.

With 1998 winners France also failing to make it through the groups in 2002, it means that the holders have fallen at the first hurdle in four of the last five World Cups.

In 2010, Italy also achieved the unusual feat of finishing bottom of their group as holders after drawing with Paraguay and New Zealand before a final-day defeat to Slovakia.

Four years later, a glorious era for Spain came to a crushing end with a 5-1 defeat by Holland and a 2-0 reverse against Chile, as they beat Australia 3-0 in their final group game, but their fate was already sealed by then.

Prof Naana Jane stings NPP on Corruption: 'Not even family i...
10 minutes ago