Chinese contractors in for stadia job 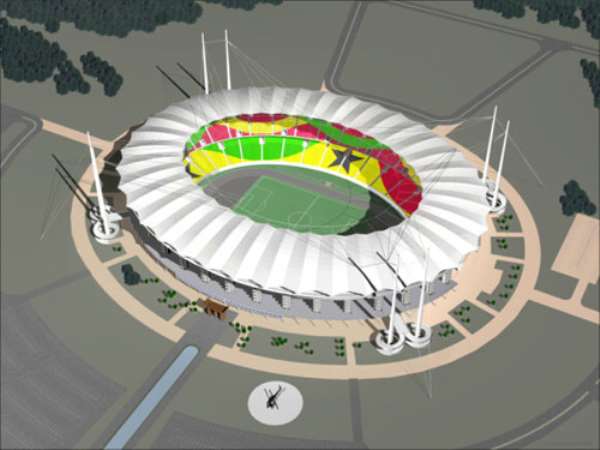 A 12-member delegation from Messrs Shanghai Construction Company Group of China has arrived in the country to undertake a two-week on the spot technical assessment of sites for the three new sports stadia to be constructed for CAN 2008.

The delegation that included Ghana's Ambassador to China, Afari Donkor, arrived in the country Monday, September 12.

It has since been holding talks with Government authorities and spent the weekend visiting the sites for the construction of the stadia at Tamale, Cape Coast and Essipong, near Sekondi.

Deputy Education and Sports Minister, Osei Bonsu Amoah, who disclosed this to The Statesman Friday, said the delegation has been grouped into three teams, with each team assigned to the sites, where they would undertake the various technical assessments on the projects.

He said the Shanghai Construction Company team was holding discussions with Government officials which could possibly lead to the signing of contracts for the three projects.

Mr Amoah, however, stopped short of confirming that the Chinese Company would be offered the deal, adding “it's too early to confirm the Shanghai deal because we're still in consultations and that's why the Company is here for on the spot technical assessment of the sites for the project.”

The Deputy Minister said the Shanghai Company's visit was to reciprocate an earlier visit by the Minister of Education and Sports, Yaw Osafo-Maafo, who led a delegation to hold discussions with the Chinese Company and also inspected stadia built by Messrs Shanghai Construction Company Group in China late last month.

It will be recalled that Mr Osafo-Maafo, at a recent Ministerial Press conference in Accra, announced that Government was in discussions with the Chinese Company for the construction of the three stadia because the Shanghai Construction Company's quotation was the most favourable, given that it was 50 percent less than the $299.8 million quoted by the companies that tendered for the project.

According to the Minister, Government sought relief from the Single-Sourcing under section 41 of the Public Procurement Act, 2003 that said, “Where there is an urgent need for goods or services and engaging in tender proceedings is impractical due to unforeseeable circumstances giving rise to the urgency which is not the result of dilatory conduct on the part of the procurement entity”, single source procurement might be applied.

The Shanghai Group put the cost for each stadium at $25 million, which was far below the construction figures of between $128 million and $216 million quoted by the companies that responded to the tenders, organised by the Ministry of Education and Sports January 6, 2005, with a deadline of not later than February 7, 2005.

Even though Government is yet to officially announce the company that would be granted the tender to undertake the construction of the three new stadia, all indications are that the Chinese Company would most likely to be awarded the tender to enable the project to take off before the end of the year.