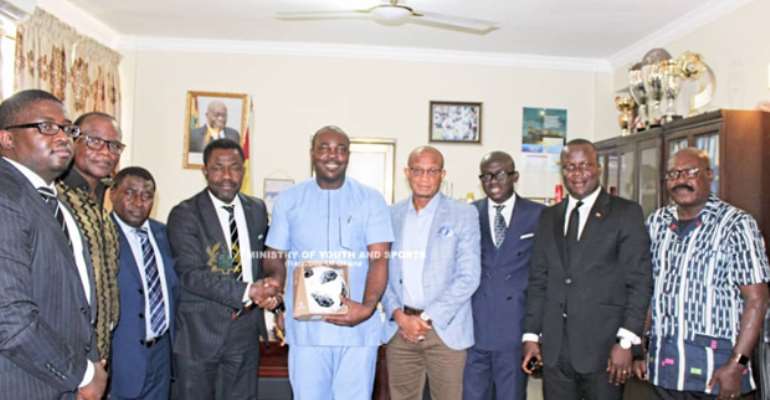 The FIFA delegation and government officials after the meeting

Public Relations Officer (PRO) of the Youth and Sports Ministry, Elvis Adjei-Baah, has stated emphatically that world football governing body FIFA would not ban Ghana due to the current crisis that has rocked the country's football.

A high-powered delegation from FIFA was in the country last week to meet government officials to address the problems.

Earlier, the football fraternity feared a FIFA ban as a result of government's decision to go to court to secure a 10-day injunction on football activities in the country.

The stakeholders took government's move to dissolve the Ghana Football Association (GFA) as interference, an act which FIFA frowns on.

After the meeting, Mr Adjei-Baah said, “We had fruitful discussions with the FIFA delegation; the Ministry will communicate what actually transpired to the public soon.

“The perception out there that FIFA will ban Ghana is out of the question, it won't happen. Valid concerns were raised and we are putting measures in place to make Ghana football the winner.”

A statement jointly signed by Veron Mosengo-Omba, FIFA Director for Africa and the Caribbean and Mustapha Abdul-Hamid, Information Minister said, “Both FIFA and the Ghanaian government have zero tolerance for corruption, criminality and all other forms of illegality.”

It added that “FIFA, in consultation with the Ghanaian government, will put in place interim measures to allow the continuation of football in Ghana.”

The meeting was necessitated by an investigative piece by Anas Amereyaw Anas and his Tiger Eye PI team that captured alleged corrupt practices by some GFA officials.

Prof Naana Jane stings NPP on Corruption: 'Not even family i...
9 minutes ago