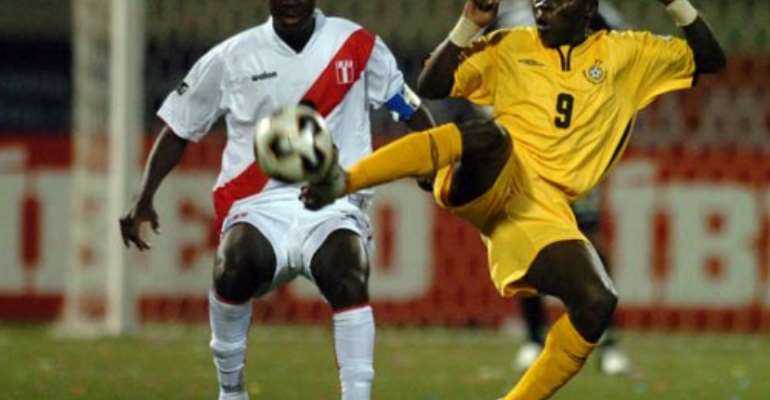 Hosts Peru drew 1:1 with two-time FIFA U-17 world champions Ghana in the second Group A fixture at the FIFA U-17 World Championship Peru 2005. The Peruvians dominated throughout and created a string of presentable openings, but a combination of poor luck and Nana Bonsu's superb goalkeeping prevented Peru from starting with a win. To add insult to injury, the Africans sealed a point courtesy of an own goal. Following the earlier 1:1 draw between China and Costa Rica, all four Group A teams lie dead level in the standings with the same number of points and goals.

A crowd numbering some 25,000 saw a furious opening featuring a seventh-minute red card for Ghana's Mubarak Wakaso after a touchline foul on Carlos Flores. Just minutes later, Ghana keeper Nana Bonsu upended Peru striker Jesus Rey in the box. Daniel Chavez stepped up to convert from the spot as the crowd erupted to hail the hosts' opener (1:0, 12'). The African championship runners-up were in disarray at this point, with huge questions asked of their ability to recover.

"I reckon it was a very harsh red card. I'm not even sure it was worthy of a booking, because my player went for the ball. I can't honestly be satisfied with the result because we came here looking to win. Every team has exactly the same prospects for the next round of games, it's as if the tournament was starting again from scratch," Ghana coach David Duncan commented afterwards.

Peru continued to hold the initiative, but Ghana clawed their way back into it and created their first chance as captain Emmanuel Ansong burst forward only for his 17th minute effort to clear the bar. Coach Duncan reshuffled his side to compensate for the sending off, withdrawing striker George Appiah and introducing defender Jonathan Quartey to stiffen the defence.

The Ghanaians settled now and began sporadically troubling the Peruvian rearguard, but the hosts coached by José Pavoni still enjoyed the lion's share of the chances. Jesus Rey delivered a perfect angled pass for Chavez but Bonsu raced from goal to clear midway through the half. The two-time U-17 world champions raced up the other end but James Tagoe was narrowly off-target. Bonsu holds Peru at bay Rey should probably have doubled his side's advantage on 37 minutes with a header, but Bonsu pulled off a stunning reaction save. The first half closed with a flurry of action as Sadat Burkari fired over the bar before David Telfer and Tagoe conjured up a golden opportunity for Samad Oppong, just inches short of connecting at the far post.

Peru's first chance after the restart felt to Miguel Cardenas but Bonsu maintained his fine form and pushed the goal-bound effort round the post. Gianfranco Espejo's prod rebounded from the upright after an almighty goalmouth scramble as the hard-working Ghanaians enjoyed a healthy slice of good fortune. Up the other end, Bukari muscled his way to the right edge of the area on the hour but Peru keeper Gian Franco Castellanos blocked.

Lady luck again smiled on the Africans as they were gifted an equaliser after an hour, Miguel Cardenas putting through his own goal from an attempted clearance (1:1, 62'). Ghana boss Duncan cut an animated figure on the touchline as he and his side sensed an unlikely victory.

However, the hosts regained the initiative in the closing quarter of an hour. Bonsu tipped Carlos Flores' 70th minute drive over the bar and the Africans held on for the draw, thus maintaining an impressive record of seven FIFA U-17 World Championship opening matches without defeat.

The next matchday features Peru against China, with Ghana facing Costa Rica.

Peru boss José Pavoni was not unhappy with the result. "I was very pleased with the way we played in the second half. We can live with a draw against the strongest team in the group, although we were close to taking all three points."