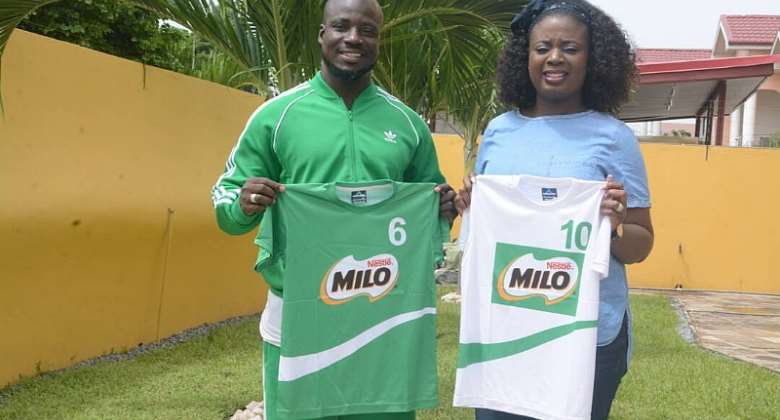 Nestlé MILO, have launched a new set of jerseys for the final games of the ongoingMILO® Under 13 Champions League which is organized in partnership with the Ghana Education Service.

Former Black Stars Captain who doubles as the Icon of the tournament, Stephen Appiah andBeverages Category Manager at Nestlé, Marilyn Oforiunveiled the Jerseys.

For the past 2 decades, Nestlé MILO® has been devoted to the cause of promoting active lifestyles and unearthing talents through its Sports Development Programs in Schools and this includes the MILO® U-13 Champions league.

The 2018 edition of the MILO® U-13 Champions League had 48 schools competing in four zones, from which 10 top schools have qualified and advanced to the finals with each school representing each of the 10 Regions of Ghana. Over 20,000 schoolchildren have participated in the tournament this year and all stakeholders are very expectant of what the schools have to show at the finals which take off at the Paa Joe Park, (KNUST) in Kumasi between the 20th and the 23rd of June 2018.

The schools that made it to the finals are Amasaman M/A Primary School from Greater Accra, Redeem D/A Primary School representing the Volta region and St. Anthony R/C Primary from the Eastern region.