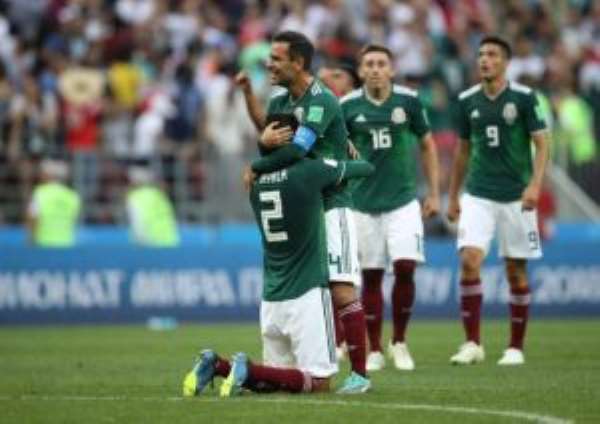 Defending champions Germany made a disastrous start to their bid to win back-to-back World Cups with a shock defeat by Mexico.

Hirving Lozano’s first-half goal was the difference between the two sides in an enthralling encounter in Moscow, but the surprising result was not the only concern for Germany coach Joachim Low.

His disjointed side looked extraordinarily vulnerable on the break-even before Javier Hernandez punished them with the pass that set up Lozano to cut inside fire home.

Toni Kroos almost replied instantly with a free-kick but Guillermo Ochoa tipped it on to the bar and that was the closest Germany came to an equaliser.

Despite facing some sustained late pressure, Mexico held on to inflict a first World Cup defeat on Die Mannschaft since they lost to Spain in the 2010 semi-final.

This was also the first time a German side had lost their opening game of this tournament since 1982 when West Germany were upset by Algeria.

It could turn out to be a damaging defeat too. Although Germany will still be expected to beat Sweden and South Korea and progress, the runner-up in Group F will face a last-16 tie against the Group E winner, expected to be Brazil.