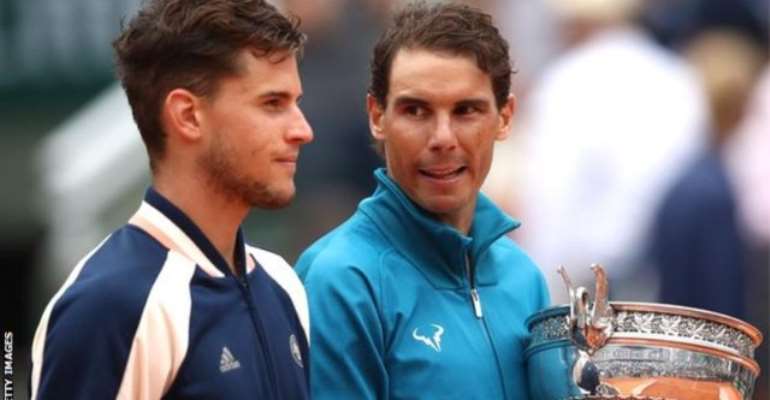 Rafael Nadal would love to surpass Roger Federer's men's record of 20 Grand Slam titles but says he is not "crazy" about catching his great rival.

"Of course I have ambition. But I can't always be thinking of more," he said.

Nadal, 32, is second behind Federer in the list of all-time Grand Slam titles, three clear of Pete Sampras in third.

Veteran pair Nadal and Federer have won the past six Grand Slams as their younger rivals struggle to dislodge them at the pinnacle of the game.

Federer, 36, skipped the clay-court season for the second successive year but will return for the grass-court season which culminates at Wimbledon next month.

"I've never been crazy about this kind of stuff. You can't live with that feeling. You have to do your way.

"I'd love to have 20 like Roger in the future or more, but it is not something in my mind. I know I've had an amazing career so I want to keep fighting for these things." 'Tough times make this win special'

In a rare show of emotion, Nadal looked close to tears as he collected the Coupe des Mousquetaires again after beating Austrian Thiem.

He said it was because he had started the clay-court season with "some doubts" before going on to win a record-extending 11th title at Roland Garros.

Nadal did not play for more than two months after the Australian Open in January - where he withdrew from his quarter-final against Marin Cilic because of a hip injury.

He pulled out of planned appearances in Acapulco, Indian Wells and Miami before returning at the start of April for Spain's Davis Cup tie against Germany.

"I had a lot of months with injury problems, so coming back to win is very special," he said.

"I came back from five months without playing a full tournament.

"So coming back and having the chance to win in Monte Carlo, Barcelona, Rome, and now especially here, it's very emotional for me.

"I arrived so-so, with some doubts about this clay-court season."