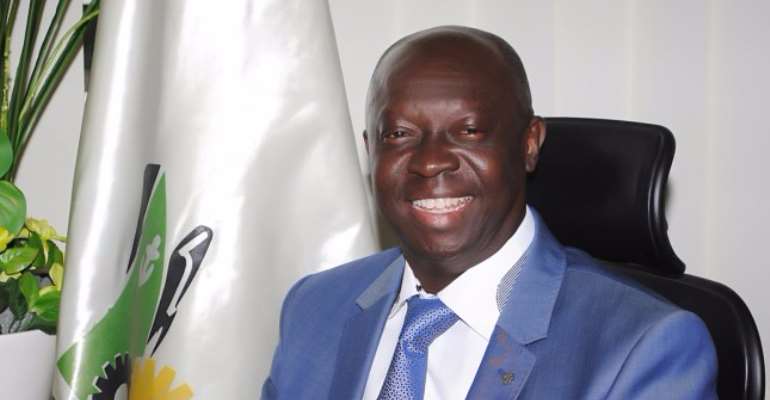 Reports indicate that president of Sports Writers Association of Ghana, Kwabena Yeboah has appointed to act as the president of the country's football governing body.

Nyantakyi was seen in the video outlining to agents of Anas’ Tiger EyePI who posed as investors the key government officials to bribe and also the steps to take to get a stranglehold on key projects in the country, as well as suggesting a dummy financial agency that would broker a sponsorship deal for the Ghana Premier League in the Anas Aremeyaw Anas Aremeyaw Anas expose.

The FIFA Council Member has been charged with defrauding with false pretense and could be sentenced to prison for 25 years if found guilty.

Background...
The Criminal Investigation Department (CID) has commenced investigations into the activities and operation of the President of Ghana Football Association (GFA), Kwesi Nyantakyi.

It follows instructions given by President Akufo-Addo on an allegation of defrauding by false pretenses against the GFA President.

This was after he has had the benefit of watching journalist Anas Aremeyaw Anas’ latest but yet-to-be-aired investigative piece dubbed #12 (When misconduct and greed become the norm) in which he was said to have not only used the name of the President but that of the Vice President and other key and influential government officials to defraud some persons.

The FA president is said to be in Egypt for CAF assignment and may land in the hands of CID operatives upon his arrival anytime from today.

Confirming the story to newsmen at the Presidency yesterday, Deputy Chief of Staff, Samuel Abu Jinapor, narrated that “In this documentary, the President of the Ghana Football Association, Kwesi Nyantakyi, is attempting to use the President’s name and that of the Vice President and other senior officials of government to induce supposed potential investors into our country to part with various sums of money.”

In that regard, he said “The President, as a responsible citizen, and more particularly as the chief custodian and enforcer of our laws, has had to consult and evaluate the content of this investigative piece; the President after these consultations is fully satisfied that a prima facie basis is being established for criminal investigations to be launched into the conduct of the President of the Ghana Football Association, Kwesi Nyantakyi, and any other accomplices that may exist.”

Mr Jinapor said, ‘The President has reported this matter to the legally sanctioned and mandated agencies of the state; the Criminal Investigation Department of the Ghana Police Service, to commence investigations into this matter.”

He, therefore, confirmed that the police CID has commenced an investigation into the matter, especially the aspects that involve the allegation of defrauding by false pretenses.

Abu Jinapor took the opportunity to reaffirm the President’s determination to fight corruption, influence peddling and bribery and his commitment to instil discipline, integrity and honesty into the public service.

To that end, he cautioned “It will not matter your status in society, and this is what we have seen playing out in respect of this GFA matter”, whiles serving notice “the President is absolutely determined to ensure that anybody who is found culpable in these investigations will remain to face the full rigours of the laws of our country.”

He, therefore, entreated all Ghanaians to allow the legally mandated security agencies to conduct investigations into the issue and bring it to a conclusion.

At the time of filing this report, however, Nyantakyi was said to be out of the country on an international assignment, as an official of the Confederation of Africa Football (CAF) on which he serves as Vice President.

It is not clear if the police would issue a warrant for INTERPOL to cause his arrest or wait for him to return to the country.

The coming days promise to be interesting with this latest revelation ahead of the official release of the infamous Anas video sending shivers down the spines of many.

Ruined Career
Editor-in-Chief of the New Crusading Guide, Abdul Malik Kweku Baako, had dropped the hint that careers and integrity of certain people captured in the yet-to-be-released investigative piece by Anas Aremeyaw Anas, will be in tatters after the undercover piece is screened.

Speaking about the investigative piece titled Number 12, which is expected to expose corrupt practices in Ghana football, Mr Baako stated that he felt sorry for those implicated.

“It’s a disaster, sometimes we are all human beings with some weaknesses here and there and I feel sorry for some because some are friends. If I had my way, perhaps, I would say: ‘Leave this alone’, but Anas is a different breed of animal and I have never ever in my life attempted to influence him. He brings it, I look at it, we can defend it, I say: ‘Proceed’. So, there are people whose careers or integrity may, perhaps, be in tatters.”

The latest exposé is said to have captured Nyantakyi dropping names of President Akufo-Addo, Vice President Bawumia and the current minister of Youth and Sports, Isaac Kwame Asiamah.

Responding to critics saying he is just peddling fear among the football fraternity. Sefa Kayi said “by the time you finish watching the video no one will tell you that change must come.”

The documentary will be shown for the first time at the Accra International Conference Centre on June 6.