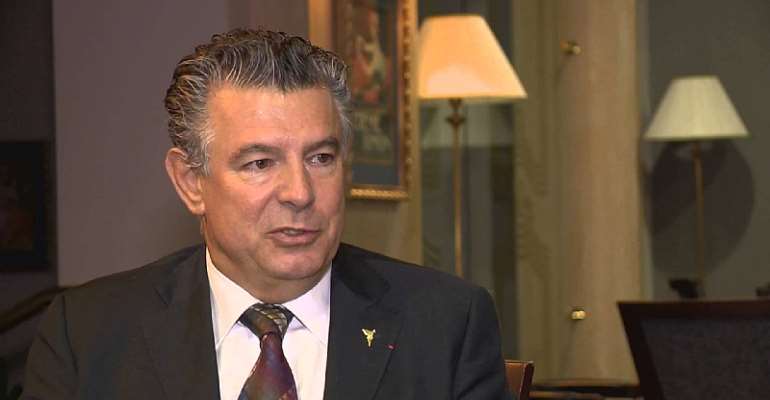 Mr Joel Bouzou, President of Peace and Sports, an internationally acclaimed sports organisation, would on Friday, May 18, hold a one-day lecture on “Peace and Sports” at the Alisa Hotel, in Accra.

The lecture, which would form part of Mr Bouzou’s visit to Ghana, would be hosted by business and investments outfit, 9BS Group of Companies and is expected to attract all stakeholders in sports.

A statement from the organisers said the lecture would be attended by stakeholders such as the National Sports Authority (NSA), Ghana Football Association (GFA), National Sports College, Ghana Olympic Committee (GOC), the Sports Writers Association of Ghana (SWAG) and the general sporting media.

The lecture would focus on the relevance of sports in promoting peace, especially in war-torn countries.

It would also focus on the power of sports, in promoting socio-economic development especially in countries that, have been hit civil by unrest and between countries engaged in wars.

Mr Bouzou is expected to arrive in Ghana on Wednesday, May 16, on a one-week working visit and he would use the opportunity to cut the sod for community projects in Koforidua in the Eastern Region.

He would later pay a courtesy call on the president, Nana Addo Akufo Addo.

Peace and Sports is a Monaco-based organization under the High Patronage of H.S.H. Prince Albert II.

It was founded in 2007, with the objective to bring the structuring values of sport to the heart of communities in crisis throughout the world, making the sport a vehicle for tolerance, respect and citizenship at the service of sustainable peace.

The backbone of its action is a group of over 80 high-level athletes, called “Champions for Peace” who dynamically support the organization’s activities at all levels.

In November 2011, Joël Bouzou was elected President of the World Olympians Association (WOA), the only international organization which unites all of the 100,000 athletes from 145 countries to have competed in an Olympic event.

He is the current President of the French Federation of Modern Pentathlon, Vice President and former Secretary-General (1997 to 2012) of the Union Internationale de Pentathlon Moderne (UIPM) and a highly accomplished Modern Pentathlete himself.

Mr Bouzou has participated in four Olympic Games (Moscow 1980, Los Angeles 1984, Seoul 1988 and Barcelona 1992) winning a bronze medal during the 1984 Games. He won the World Championship title in Modern Pentathlon in 1987.

In 1991, Joël Bouzou founded the association “Rassemblement par le Sport” (“Together through Sport”) and created the “Champions in the Street” program, which helps the social insertion of young people through sport in city suburbs, using champions as role models.

A French national, Bouzou has been awarded the Legion of Honour (the highest decoration in France), and the National Order of Merit. He has also been decorated with the French medal ‘Médaille d’Or de la Jeunesse et des Sports’ (‘Gold Medal for Youth and Sports’).

In 2010, Bouzou was awarded a Diploma Honoris Causa in Humanities from the UN-mandated University for Peace in Costa-Rica in recognition of “his unique worldwide leadership role in promoting peace and mutual understanding among different cultures, and his leadership of organizations devoted to these objectives.”

Mr Bouzou is currently Advisor to H.S.H. Prince Albert II of Monaco, Administrator of the A.S. Monaco Football Club and Member of the IOC Sport and Active Society Commission.