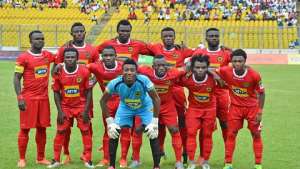 Kumasi Asante Kotoko played away at Dawu Park when they faced Dreams FC in match week seven (7) of the Ghana Premier League but unfortunately lost by a goal to nil. Kotoko now sits 7th on the league log with just ten (10) points after playing seven games.

The clubs performance in the league has been on and off since the start of the season and it seems the fans of the club are fed up with the inconsistency of the team.

Fans of Kotoko did not take the teams last match results likely and are calling for the head of their coach, Paa Kwasi Fabian. The new gaffer was appointed at the start of the league but has since not been able to instil his philosophy on the team. The former U-17 coach has not been able to turn around the fortunes of the Porcupine Warriors and they are still struggling in the local league.

Some agitated supporters who spoke to modernghana.com threatened to stop going to stadiums to support the team if the new coach is not sacked within the next few days. Others lamented about why their players cannot play for 90 minutes and are asking for some players who are not performing to be axed together with Fabian.

It is understandable for supporters to be angry after a loss. Emotions will rise when supporters expect a win from their team and they do not get the results.

“Management has so much believe in Paa Kwasi Fabian and very soon everybody including the supporters will know why”, Obed Acheampong told Asempa FM.