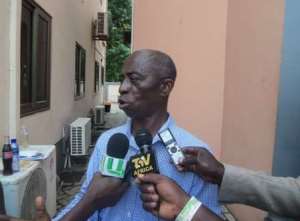 Chief Executive Officer of Wa All Stars, Oduro Nyarko has taken a swipe at referee David Laryea for his performance in their 1-0 defeat to Dreams FC on Matchday 3 of the Ghana Premier League on Wednesday.

The Northerners were pipped 1-0 courtesy an 8th-minute strike by budding hitman Sharani Zubeiru at the Cape Coast Sports Stadium.

Midway through the second half, David Laryea failed to whistle after Jeffrey Degorl was tripped by Razak Cromwell in the eighteen-yard box.

And in an interview with Happy FM, Oduro Nyarko insisted that their loss was caused by referee Laryea and disclosed that they will take him on till justice is served.

"Things didn't go well, the performance was good but the forwards couldn't convert the chances we had," Sarfo stated on Happy FM.

"The referee didn't do well because we had a clear penalty in the second half but he surprisingly waved it off. If he says that incident didn't merit a penalty then he should be ashamed of himself."

"His performance in the game was okay but that penalty decision he waved off clears every good thing he did in the game. I believe and convinced that he will be put away for a long time after the match review panel watches the video...I have that conviction."

The former Premier League have failed to score in their three matches played and are yet to win a match.

‘Flouters Of Ban On Public Gatherings Will Be Dealt With’ – ...
57 minutes ago