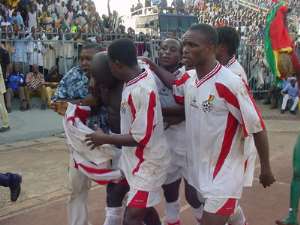 Ibrahim Dabo, Goal.com's Africa correspondent, runs the rule over the continent's World Cup Qualifying competition. In this article he looks at Group B – comprising Ghana, South Africa, DR Congo, Cape Verde, Burkina Faso and Uganda... The Black Stars are with no doubt desperately looking forward to a World Cup berth and created more awareness about their intentions when they beat South Africa, one of the group's favorites to qualify [at least at the start of the qualifiers] home and away. A surprising 2-0 away win for Ghana against South Africa in Johannesburg is a positive step for the West Africans and those three vital points have put them in a good position. They currently top the table on a better head to head record with two more rounds of matches to play. Ghana has talented players and has produced some of Africa's best players in the past with the likes of Abedi Pele and Tony Yeboah. They have won the African Nations Cup before but unfortunately they have been unable to make it to the bigger football tournament – the World Cup Finals. But now with young talented players such as midfielders Stephen Appiah who has now joined Turkish club Fenerbahce from Italian giants Juventus and Lyon's Micheal Essien who is linked with a move to England's Premiership champions Chelsea, the Black Stars may realize that this is an opportunity to make their debut after a remarkable campaign so far. This would be a tough task for them as they share 15 points with South Africa at the top of the table, which means they have to win their remaining fixtures against Uganda and Cape Verde. The Ghanaians have maintained a top form having lost only one out of eight matches played so far. South Africa's next two fixtures are against Burkina Faso and DR Congo and depending on the results in the next round of matches in September, we might see a shift in points at the top of the group. The Bafana Bafana qualified for the 2002 World Cup finals for the first time but faced an early exit as they failed to cross the group stages. South Africa fans would be delighted to see their team feature in the finals again next year to show many what awaits them in 2010 when they would be the first African nation to host the World Cup finals. DR Congo with twelve points trail Ghana and South Africa from third place in the group. FORM GUIDE OF TOP THREE TEAMS IN GROUP: Ghana: Last 5 Matches: WDDWW The first win was on home soil when they beat Cape Verde 2-0 last September. The next two matches were a goalless draw at home to DR Congo and a 1-1 draw in the return leg. They won their last two matches against Burkina Faso and South Africa 2-1 and 2-0 respectively and share points with South Africa at the top of the group but lead on goal difference. South Africa: Last 5 Matches: LWWWL A win against Ghana in their last match would have given South Africa an advantage and elevate to the top of Group B. The first loss in their last five matches came about when they lost 1-0 away to DR Congo in September. They won their next three matches, beating Uganda 1-0 and secured a 2-1 in the return leg in South Africa. The last win was 2-1 away to Cape Verde in June. D.R. Congo: Last 5 matches: WDDWL D.R. Congo beat South Africa 1-0 in their first win in the last five qualifiers. They could only but secure a goalless draw away to Ghana and a 1-1 draw during the return leg in March. They smashed Uganda 4-0 in their last win but hindered their hopes of playing in the World Cup finals when they lost their last match 2-0 away to Burkina Faso in June. LAST THREE TEAMS IN GROUP: Cape Verde tops the bottom three teams in the group of 6 with ten points, trailing group leaders Ghana and South Africa by five points. Next is Burkina Faso with nine points and Uganda in 6 th place with seven points. The next round of matches are scheduled for September 3 and 4 while the final round of qualifiers will be played in October. Ibrahim Dabo