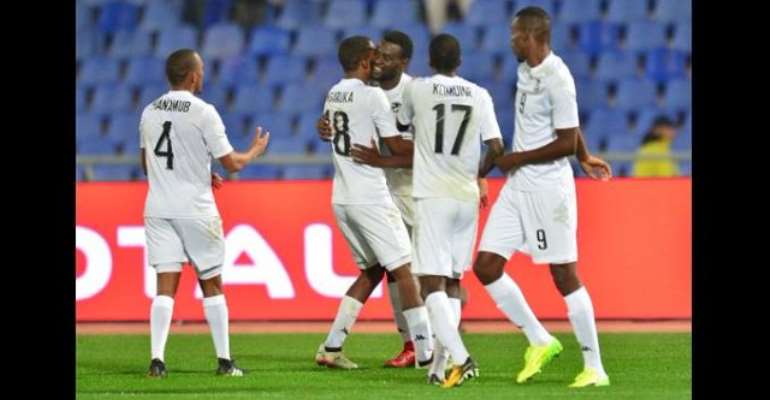 Namibia secured a second successive injury-time victory at the 2018 African Nations Championship to join Group B rivals Zambia in the quarterfinals.

The Brave Warriors defeated Uganda 1-0 at the Marrakech Stadium in Morocco on Thursday night, having overcome Ivory Coast in a similar fashion on Sunday.

The result means Zambia (who beat Ivory Coast earlier in the evening) and Namibia have joined Morocco and Sudan (both Group A) in the final eight of the continental competition, while the Cranes and Elephants have both been eliminated.

Each side created just one clear chance in the first half. Uganda’s arrived within the opening quarter hour, as Allan Kyambadde latched onto a loose ball after Lloyd Kazapua had failed to claim a cross, but the goalkeeper recovered well to make a brave save.

At the other end, Namibia’s best opportunity arrived a short while before the halftime break when Hendrick Somaeb raced free down the right, but his attempt to lob on-rushing goalkeeper Ismail Watenga ended with the ball travelling out for a goal kick.

The Cranes created another good opening 10 minutes into the second half when a cross from the right flank picked out Derrick Nsibambi, but the striker’s somewhat tame effort from close range was pushed away by Kazapua.

Just over 10 minutes later Nsibambi outmuscled Vetunuavi Hambira before opening up his body for a shot which flew across goal and just wide of the far post, while Kazapua was soon in action again, once more denying Kyambadde from a snapshot.

Uganda appeared to be building up a head of steam, but on 76 minutes they were reduced to 10 men when defender Timothy Awany was harshly awarded a second caution and sent for an early shower.

This handed the initiative to the Brave Warriors and on 83 minutes they should have broken the deadlock when Halleluya Nekundi was presented with a close-range scoring chance, but he shot straight at Watenga.

However, Nekundi secured all three points for Namibia when he found space on the left of the penalty area and fired a shot into the roof of the net in the second minute of injury time.