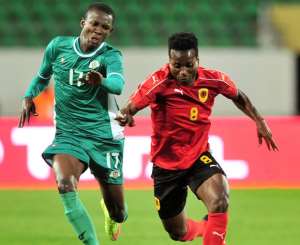 Angola were held to a goalless by Burkina Faso in the 2018 African Nations Championship (CHAN) Group D match at the Stade Adrar in Morocco on Tuesday.

The first-half was dominated by the Palancas Negras with the Stallions happy to sit back and launch quick counter attacks.

Burkina Faso forward Somgogma Hermann Nikiema and Angola striker Va both failed to convert their chances in the first-half.

As a result, the score was 0-0 between Angola and Burkina Faso at the interval following a tightly contested first-half in Agadir.

Aboubacar Sowadogo, the Burkina Faso goalkeeper, kept his side in the game in the second-half as he produced several good saves to deny the Angolans.

The match ended in a 0-0 draw after Burkina Faso contained Angola in the latter stages of the encounter.