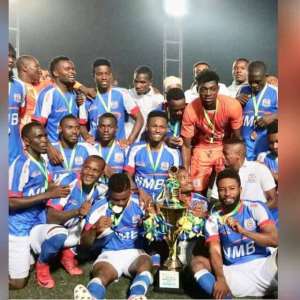 Razak Abalora displayed a stupendous performance to see Tanzania side Azam FC emerge the winners of the 2018 Mapinduzi Cup on Saturday by beaten URA FC of Uganda on penalties.

The in-form goalie guided his side to a fantastic 0-0 draw pulling some brilliant saves to deny the Ugandan side the chance to win the game.

Abalora rose to the occasion and saved two penalties during the shootouts to ensure the trophy followed Azam to Tanzania.

The former Black Stars B shot-stopper was voted the man of the match after the game following his magnificent display.

Abalora has been the main pivot around which Azam lived their dream of winning the Mapinduzi Cup after brilliant performances in their previous games, winning the man of the match twice before the final.

The former WAFA goalie has been an influential part of Azam since joining last summer and has been lauded by the Tanzanian press, tagging him as the new face f goalkeeping in the East African country.

the Mapinduzi Cup is a special competition played by East African clubs to commemorate the Revolution of Zanzibar.