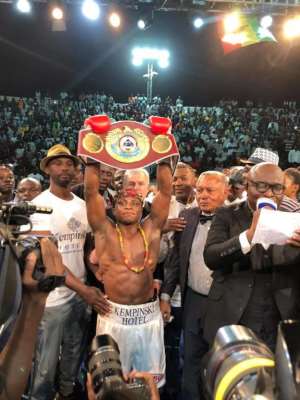 Ghana’s Isaac ‘Royal Storm’ Dogboe made history last Saturday as he becomes the youngest professional boxer to win a World Title for Ghana.

The 23-year-old turned in one of his best performances at the packed Bukom Boxing Arena by stopping rugged Mexican fighter Cesar Juarez in round five to win the interim WBO World super bantamweight strap.

Dogboe dropped Juarez in the second round with a deadly left hook – the Mexican beat the count.

Juarez then mounted intense pressure on Dogboe in round three and four, but in the fifth round, another ferocious left hook sent Juarez crashing to the mat. Though he beat the count but he was in bad shape forcing the referee Tony Weeks to stop the bout.

Dogboe thus becomes the eighth Ghanaian to win a World title but looking at the ages of those boxers, the former Olympian is the youngest among them.